I live in a small town called Whitehaven .It sits on the west coast  of Cumbria on the fringes of the English lake district. It has one of  those picturesque little fishing ports straight off a holiday postcard with a small fleet of fishing boats and bigger trawlers that operate out of the port. The boats fish up and down the west coast of Scotland , the Isle of man and around the perimeter of Ireland.The tragic thing that we`ve had to put up with for years is having to sit there and watch them unloading their boxes of magnificent fish and prime shellfish into refrigerated wagons and drive off into yonder and away to the European Markets , France  ,Italy Spain etc.

Imagine my joy a couple of weeks ago when out of nowhere , a wonderful new wet fish shop popped up on the harbourside .A local well known fishing family bowed to local public pressure , seen the gap in the market and decided to go for gold. I visited the shop as soon as i found out about it and was amazed at the fresh produce sitting in the displays that we`d been missing out on for years and years. Turbot the size of dustbin lids , beautiful Brill , wild sea bass , huge  bright orange spotted plaice , sea bream and Langoustines so fresh they were jumping all over the big plastic box they had just arrived in.

I was totally spoiled for choice, the Isle of man Scallops were just being walked in off the boat and caught my eye.Mr Donnan the owner couldn`t resist prising one open to show me the beautiful nugget of meat inside.He carved off and fed me a slice of the white flesh, wow , it was so sweet and full of flavour.I plumped for a dozen in their shells.The Scallops were so fresh , the movement of the box had them clicking away thinking they were back in the sea.Unfortunately for them they
were on a one way journey to my kitchen and on to the griddle. 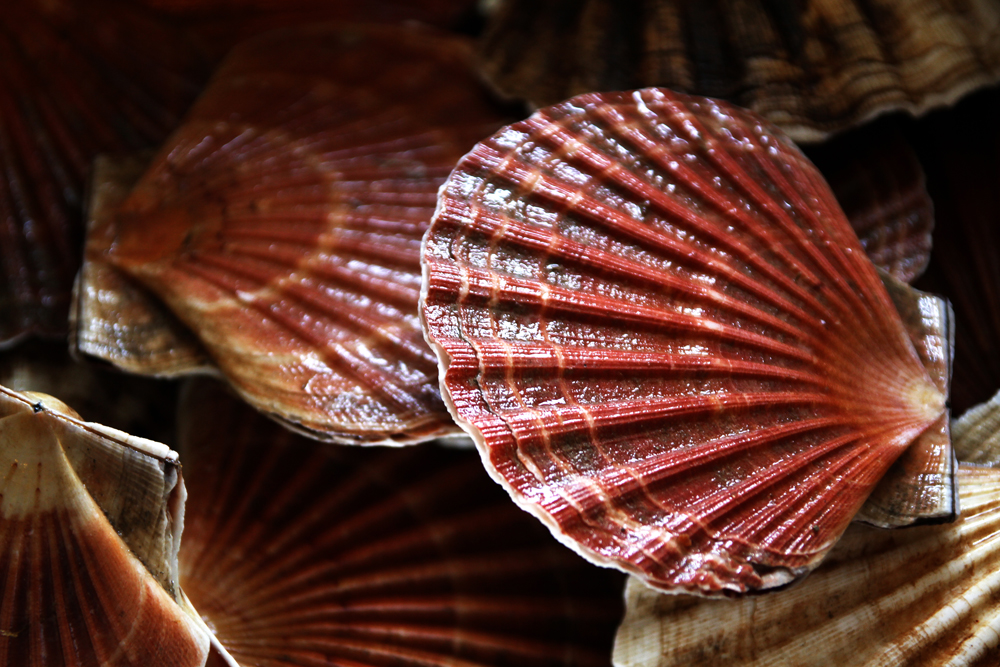 I received the `Pier` cookbook for christmas last year and one of the dishes on  a double page spread stood out to me as a  culinary work of art. Now sad as  it sounds i was lying in bed looking at the photo of the`scallops with cauliflower` dish almost nightly, it was a photo and recipe.which i had to try and re-create  at home myself ( with my own little twist). I purchased  some white gloss perspex off ebay and also a couple of big white softbox lights to create the correct lighting and background for the recipe.They weren`t expensive and would come in handy for lots of future projects. I  decided to simply cook the Scallops in an oiled heavy based pan to achieve a beautiful caramelisation on their flat surface. Cauliflower cooked four ways would accompany the shellfish , A nice creamy puree (butter , chicken stock and cream ) , Caramelised florets  –  ( cooked in rapeseed oil and butter in a lidded pan ) , quickly blanched shaved  floret slices and discs cut from  the root. I used two dressings to go with the dish , a warm Cumbrian Porcini cream and a lemon and truffle oil vinaigrette ( which i dipped the cauli  shavings into ) I took a quick walk to the nearest hedgerow  for my `wild` accompaniments and found lots of Broom ( gorse bush ) flowers. Hedge garlic and new seasons  Wood sorrel leaves. 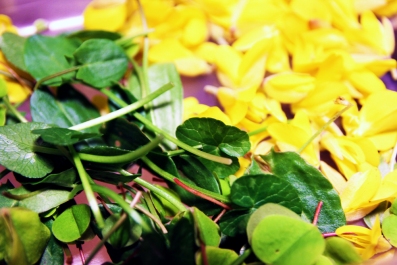 My trip back home also produced an old piece of Cumbrian blue slate from a skip which ended up in the shower with me and was perfectly scrubbed up to serve as a grey textured background for the pics. The food spoke for itself , the sweetest scallops were amazing , the cauliflower puree was so good i ate all the leftovers and the caramelised cauliflower , an idea i pinched off  Simon Rogan was also gone in no time at all. I didnt rate the broom flowers at all.Apparently theyre at their best in June when they take on a coconut flavour….they were tasteless in march.

I also got a few pieces of wonderful snow white Irish sea cod loin when i was in the new fish shop so i used the opportunity to cook a dish i`d observed Aggi Sverrison cooking on the Saturday Kitchen programme.It was fairly simple and straight forward , with a little twist of course.

Cod with cauliflower cous cous , mixed nuts , Cumbrian seaweed and lemon. Trouble was , i set the microwave on fire this time trying to dry the seaweed using the same method i use for drying herbs.Guess it must be all the minerals in the seaweed as they were crackling and sparking little blue sparks everywhere.This set fire to the kitchen roll inside the microwave and ruined all the seaweed….lesson learned , i used the oven. The cauliflower florets were chopped quite finely and fried off with the cooked spelt barley.

Cashew nuts , walnuts , almonds and pumpkin seeds were all toasted in a heavy based pan until they gave off their oils and started to roast nicely.They were roughly chopped and added to the cauliflower and barley mix. The dressing was made by blitzing blanched ( 3 times ) lemon peel with olive oil , lemon juice and sugar until totally smooth. A little of this was mixed into the cous cous mixture and the rest used for the dish.The seaweed powder was added as a generous sprinkle on the finished recipe…..Oh and it was rather delish…and very healthy too. 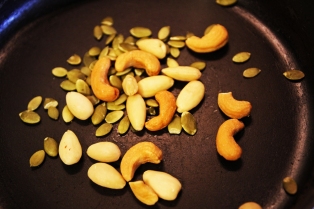 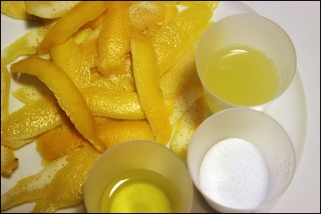 The photo above was taken on a white acetate base  with white acetate background and a couple of softbox lights.Flash wasn`t used. The photo below was exactly the same apart from i used a high gloss black acetate as a base and background.No flash was used. All of my pics always go through photoshop CS5 for a little post processing.

Oh and just for the record, i had a little bit of camera testing last weekend.Home smoked salmon with a horseradish creme Fraiche , absolutely nothing adventurous but just a comparison between 2 very good cameras snapping the same food. The Canon EOS 7D  and Lens ( £ 2,500 ) versus the Panasonic Lumix LX5 ( £299 ). I just took a few photos with each and then checked them out together. Funnily enough , i preferred the results from the Lumix ( photo on the right ) to the Canon ( photo left ).So it just goes to show……Bigger aint always better….see for yourselves, i`m sure youll agree.