A CHANGING MENU BASED UPON THE IMAGINATIVE CREATIONS OF MARCUS WAREING AND HIS TEAM.

My crazy dining companion the ever so eccentric Laird Bell was a tad jealous when i managed to get into the Berkeley before him last August.He`d planned to go there for quite a while and he had dinner booked but was totally peed off when he had to cancel at the last minute ….the day before my visit, Ahhh bless .Of course i didn`t rub the salt into his wounds telling him all about one of my best meals of a lifetime , the  fabulous 22 course meal cooked for me by Marcus Wareings head chef James Knappett ( click HERE to read all about the meal ). The only way to shut the big man up was to head off to London again and make sure that another similar experience was booked again at the Berkeley….then maybe he would shut up whinging at me. All was organised with a very helpful reservations team at the Berkeley and we decided to go for Chefs tasting menu..the big one and we would be fed whatever chef decided to cook and whatever was available on the markets at the present moment….Exciting ?…oh yeah,  Personally i thought that this way would be the best way to let the chefs play and give the kitchen the freedom to cook whatever they wanted for us knowing that we would be more than happy to be their guinea pigs.

So same as last time , we turned up 3o minutes early and headed to the Berkeley “Blue bar”. It`s called that because…erm…its totally blue, infact the whole place really is painted blue. It`s very different. It`s a buzzy little bar , very popular during early evening and has an amazing list of cocktails that`s so long its impossible to start deciding what to drink.We both went for Champers cocktails , mine was served with Black raspberry liquor.The crazy Laird plumped for a fine Champagne remy XO with brown sugar cube. At 8.30 sharp we strolled through the hotel to the Marcus Wareing restaurant and straight away we were met by a little posse of staff , all smiles and handshakes “welcome back Mr Spedding , so pleased to see you here again”….wow , i was impressed.Their warm and very friendly greeting immediately setting the mood…i walked over to my table like a cock chicken, feeling like royalty….I knew that this was going to be another fantastic Berkeley experience.

As far as chefs go, I`d been wondering who would be cooking my meal now that Marcus`s head chef James Knappett had left to work for Brett Graham at The Ledbury.I asked one of the staff and was informed that Marcus was in the kitchens every day and working on the pass.Tonight unfortunately he had to dash elsewhere but had left the kitchen in the capable hands of his head chef…..I`m sure that we`ll get to meet the main man eventually. The Maitre d came to settle us in for the evening , lovely guy called Dimitri. He just smiled and gave us the old wicked smirk and … ” We won`t be giving you menus this evening Mr Spedding”…..Ahhhh ,how good is that ?

The Sommelier was right on Dimitris heels…with another big smile. “Welcome back Mr Spedding”.He was holding a bottle of Champagne and two glasses….I smiled a big stupid smile , I knew what was on the way….Lots of wine , we were to be sampling some of the Berkeleys fantastic wines with our dinner.

Now before i kick off with the food pics , as i explained in my James Knappett blog post last time ,the lighting isn`t the best by a long way for my geeky foodie pics.Its taken an awful lot of work on Photoshop to bring these ones round to something acceptable.My trusty little Lumix struggled quite badly during the meal.I don`t use flash, ever.I only use natural lighting so as a result the pics all come out very dark , grainy and without Photoshop they wouldn`t be of any use at all.My next blog post will be about my lunch in The Ritz , the pics taken at Lunch time in daylight and they`re worlds apart in terms of quality so ..that`s my excuse and i`m sticking to it.If anyone wants to see just how good a £299 Lumix is when it works in daylight then check out my recent Lenclume photos on my homepage…….On with the food – 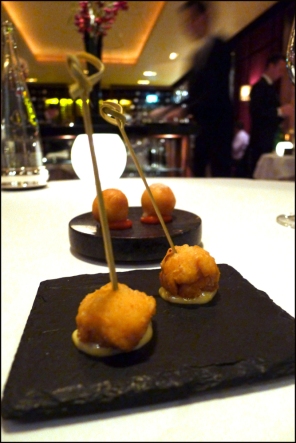 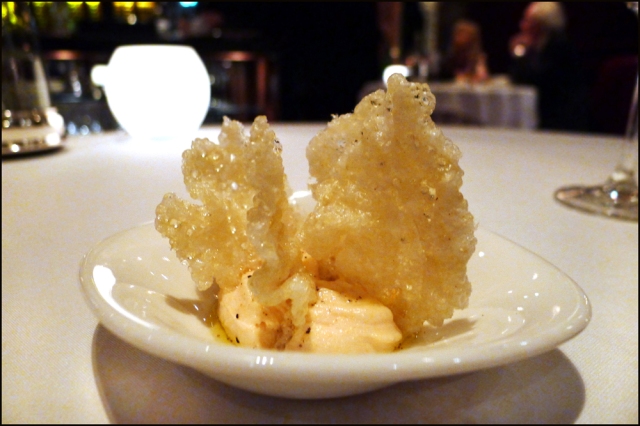 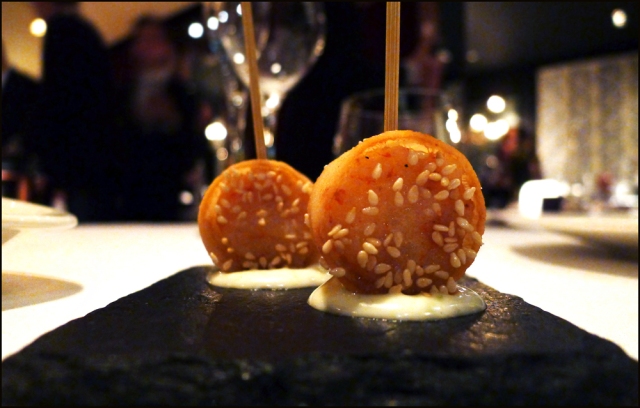 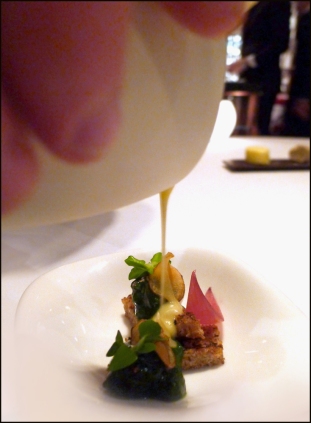 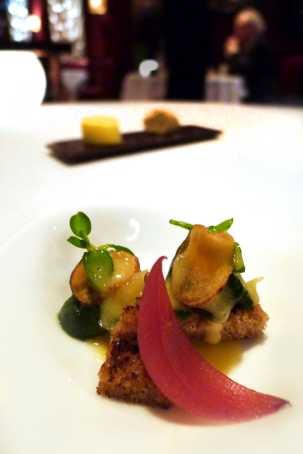 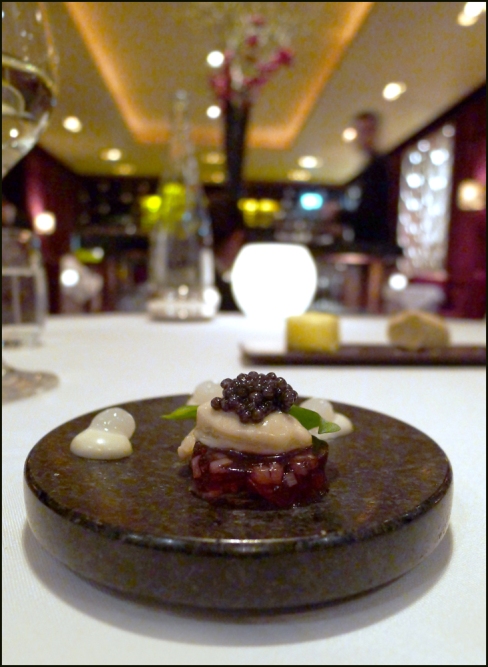 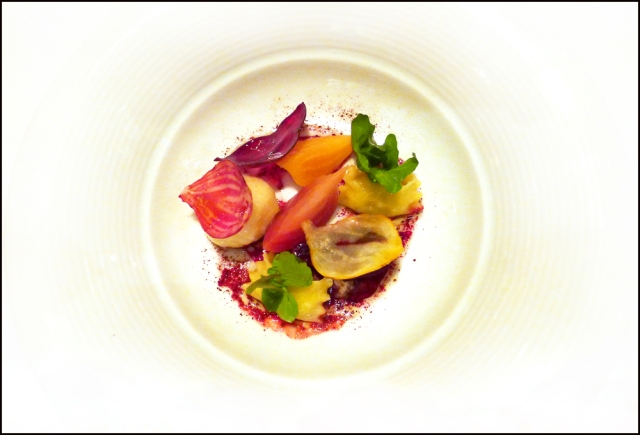 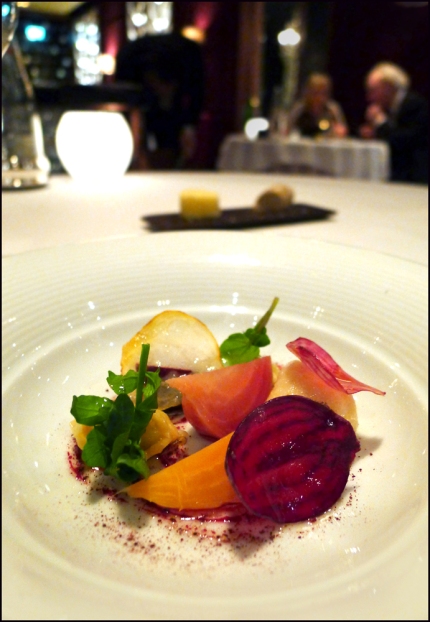 Sorbe – An explanation as i had to look it up myself , never heard of them until last week. ( These tiny pear-shaped fruits are grown in Piedmont. Sorbe are fruits from the same family as the rose, but grown on trees similar to Rowans. They are picked when they are what would seem to be ‘ripe’. However, at this stage they are not yet ready to eat. Although it goes against what you might expect, to really enjoy their true flavour, you must let them ripen to a stage which looks like they are rotten. When they reach this rich deep brown colour, the flavour will be just incredible. Chocolatey, sweet and even with hints of Cognac flavour due to the fermentation process of ripening, the texture is soft, floury and simply wonderful) 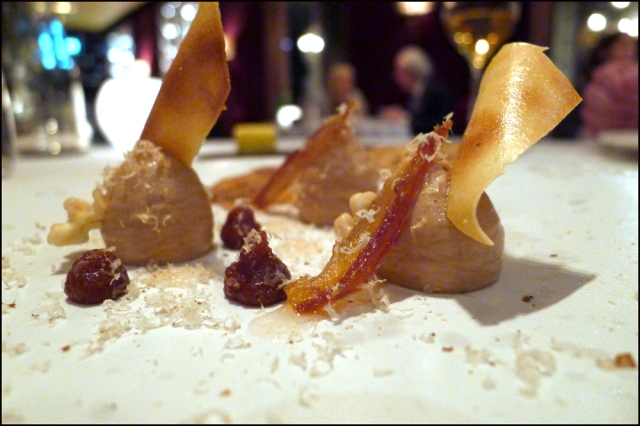 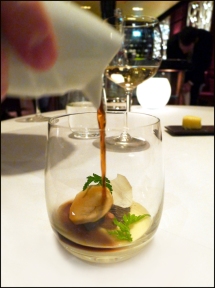 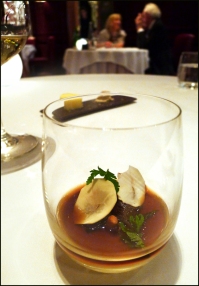 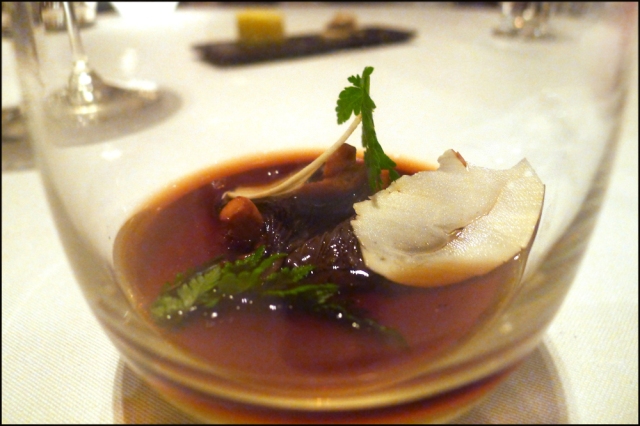 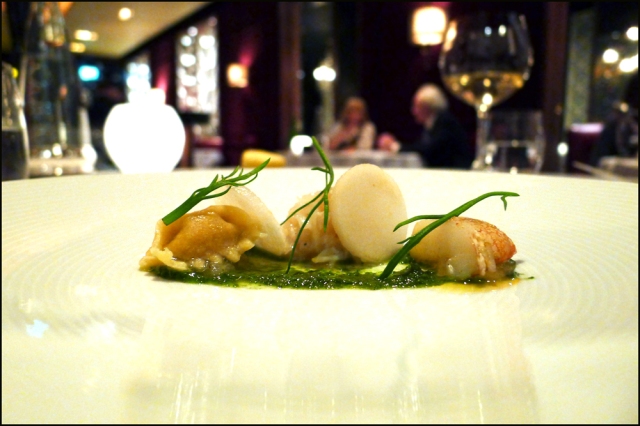 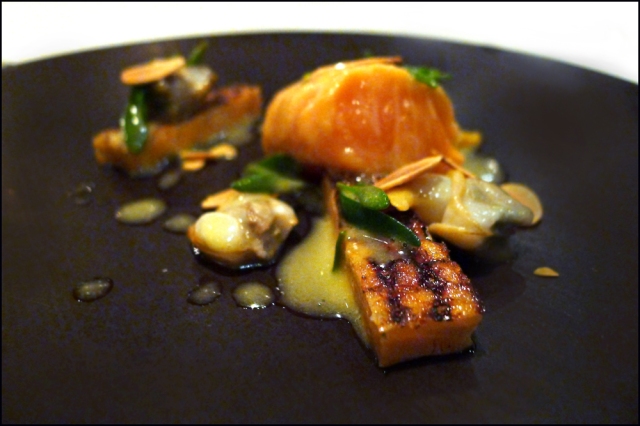 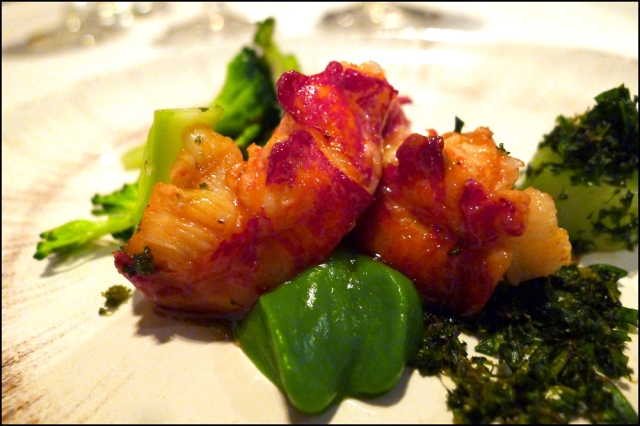 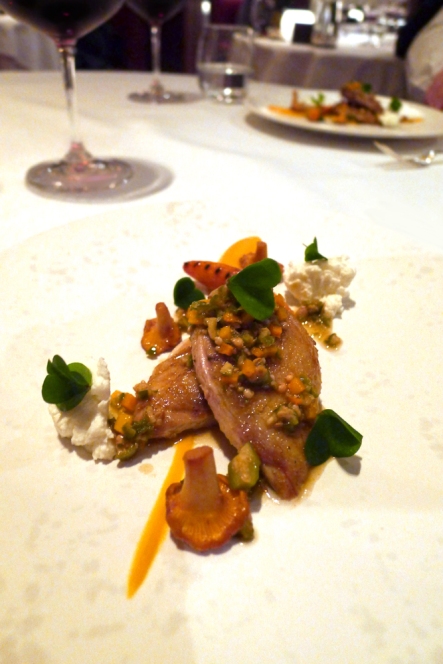 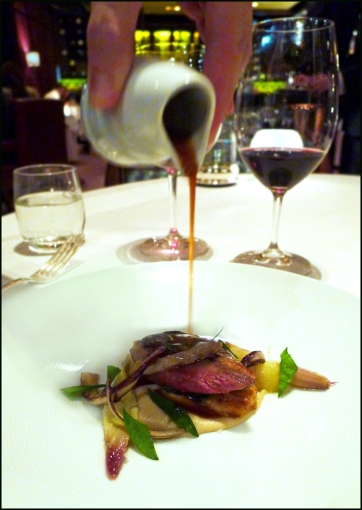 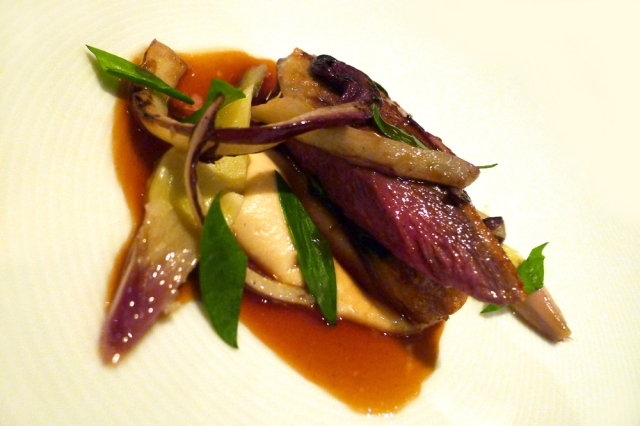 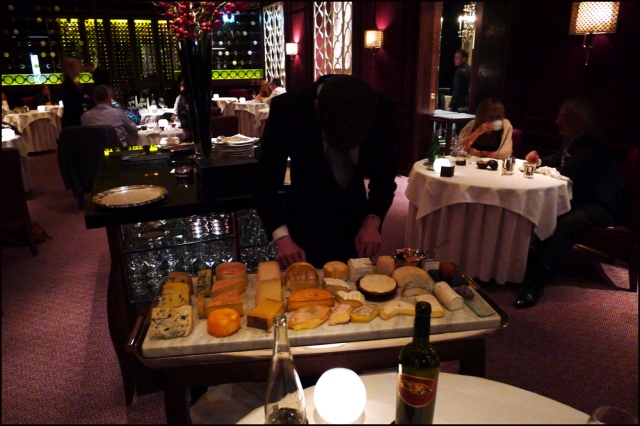 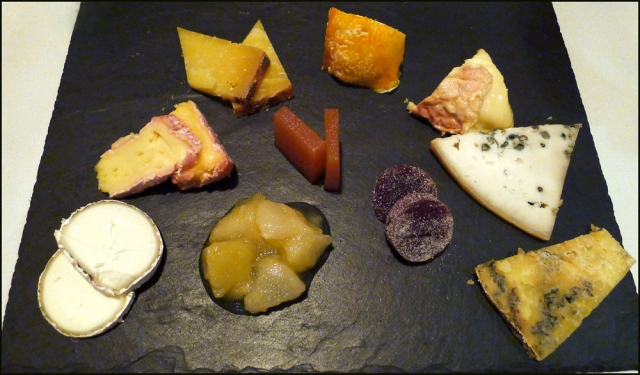 This was the moment that i knew we were in for a sweet treat.Six glasses appeared and we were each given a taste of 3 dessert wines to accompany the puddings which were about to follow….Ahhhh , my favourite part of the meal was just about to get even better. 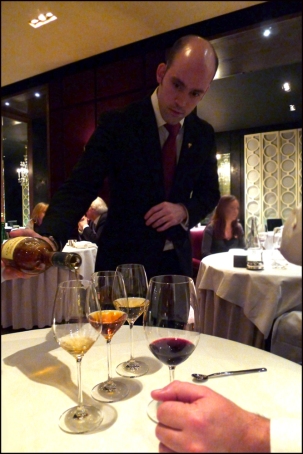 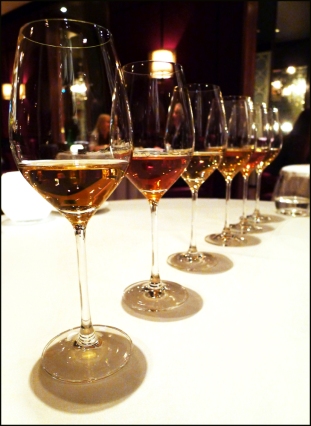 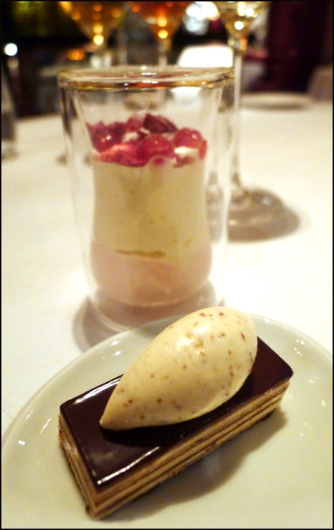 Marcus Wareings baked Egg custard tart.This one made it to the final of Great British Menu….it`s simple and it was absolutely beautiful….and i have the recipe. 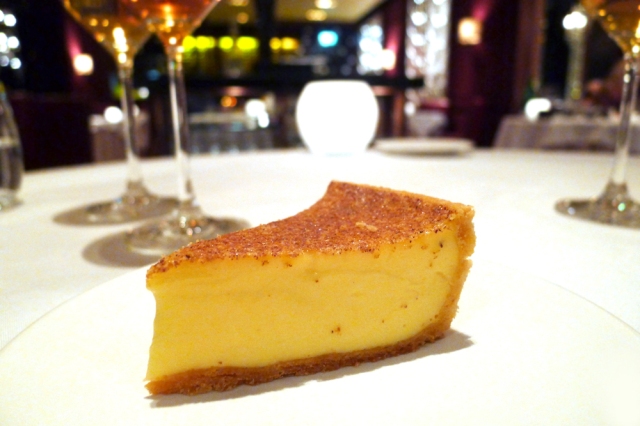 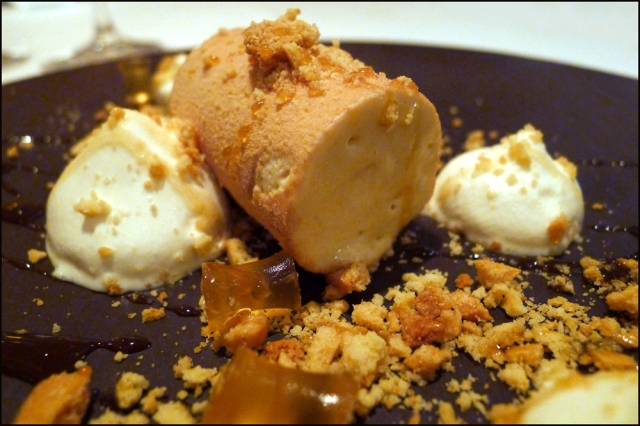 As far as i know ,this Chocolate creation doesn`t have a name yet.This one was brought to us by Dimitri and with the explanation that it was still in the experimental stages with Marcus so a little treat for us and a taster on a future dish. It was a Chocolate creation that the team were working on and the unique selling point is that the chocolate is made with a water based ganache. It’s totally dairy free and made with a Brazilian cacao bean variety called Foastero 68%.It was pretty dry , fruity , woody , peppery and had hints of Black tea….All in all , pretty unusual , very intense and i loved it…. i look forward to its future. 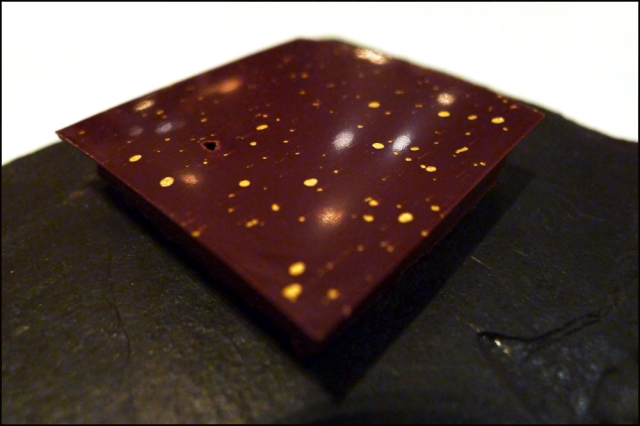 Handmade Chocolates to finish off the experience. 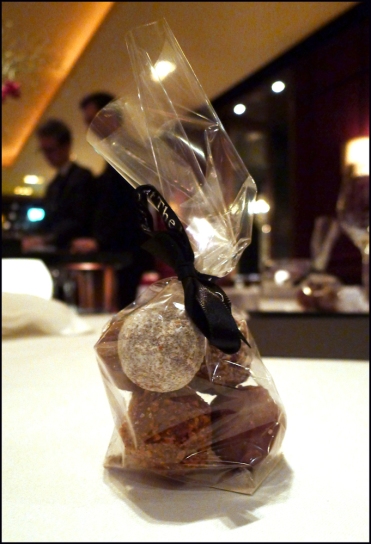 And to sum it all up…. As you can see from the photos , the food speaks for itself. As far as i`m concerned i have now been there twice and in my eyes it`s a 3 Star restaurant , no bones about it. Marcus Wareing at the Berkeley stands up there proudly at the top of the premiership , it`s simply fine dining at the highest levels that the UK has to offer.I`ve heard good things about the Waterside in Bray as the best dining experience in the business and those who have dined there rate it on par with the Berkeley for food and front of house hospitality.I personally have never had service like this anywhere that i`ve ever been in my entire life.The service at the Berkeley is phenominal…they have totally conquered it. It was an absolute pleasure , the whole evening beginning to end ,smiling faces , VIP treatment for myself and everyone else in the restaurant , top notch food and amazing wines…..and the most lovely team that anyone could ever meet.

Thank you very much Guys n girls…..you made me very happy.

TO VIEW ALL OF THE PICS FROM MY VISIT , PLEASE CLICK HERE.