Next Easter i`ll be making the long journey all the way to Singapore to eat at Restaurant `Waku Ghin`. I was so impressed after reading several blog posts that i ended up day dreaming about the food there every day and so i eventually emailed them to make a reservation.I only wanted a table for one and believe it or not they were already booked up 6 months in advance. They did however manage to offer me the last place on the early evening sitting. The reason why Waku Ghin is booked up so far in advance is because the Ingredients are literally alive and kicking seconds before they`re humanely dispatched and cooked in front of the diner. The kitchen uses the worlds finest ingredients which are then expertly cooked by highly skilled chefs in front of the diners eyes in a 3 hour extravaganza of culinary entertainment. Closer to home now and my discovery that we have our very own version of Waku Ghin here in the UK. Chef Mikael Jonssons Hedone restaurant in Chiswick is a relatively new venture and is currently creating rather a stir throughout the culinary world.I wont go into the nitty gritty fine details about the good and not so good feedback that the restaurant has been getting since its opening in 2011 , you can simply check those out on the other blogs. I can only speak as i find and all i found was pure goodness and quality here.There`s no airs and graces at Hedone, people come here to eat and drink and the buzzy atmosphere and laughing diners are testament to a very relaxing and happy environment.

The story goes that Chef Mikael orginally trained as a chef in his native Sweden before leaving the kitchen to become a Lawyer. He then decided to go back into the food industry and took a year out to travel around Europe meeting suppliers and sourcing out the best Artisan producers , farmers and suppliers for all of the produce that he would use in his own restaurant. That year of research offered Mikael the very best products that money could buy ,  inferior ingredients never ever seen the light of day. Mikaels philosophy was such that he would follow this path, never deviate from it and only the best would do. A perfect example of this would be Bread. Chef wanted to make the best bread possible so he made the journey to one of the premier bakeries in Paris to spend time working with the owner . He would then source his own `best of British` ingredients , bought the same oven and subsequently  recreated the products in the UK that he had been making in France. 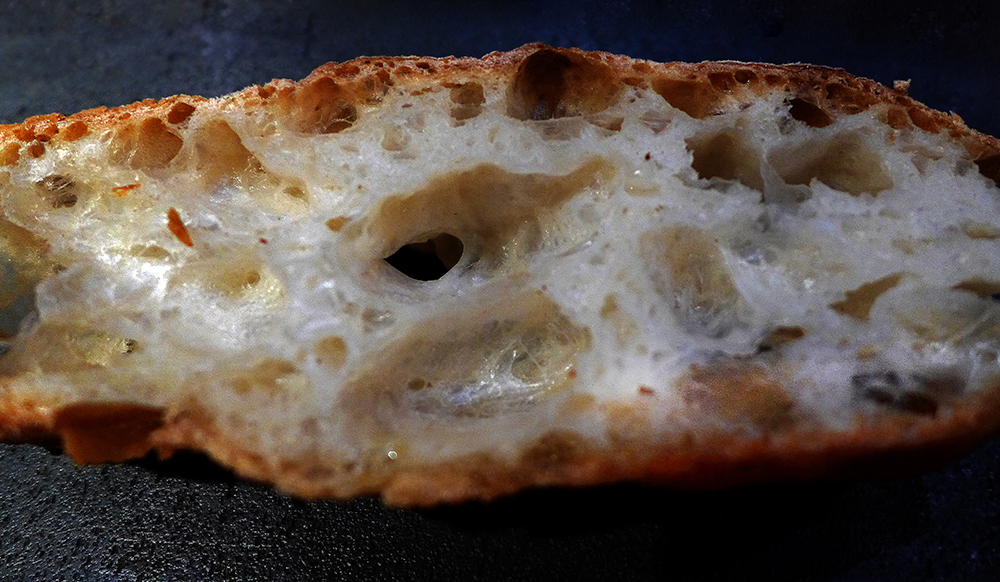 This same philosophy was also adopted with the Scottish fishing industry , UK Farmers and Game dealers and the various vegetable growers around the British isles. Ok….I`m babbling foodie nerd talk so on to the food and actually getting to the restaurant.

It`s a fairly simple journey yet at the same time it`s quite a distance from the city centre. My hotel was in Russell square and it took me exactly 55 minutes door to door to get there. Please don`t let that put you off because it`s more than worth the journey from any part of the UK never mind central London. Don`t bother with a taxi as that will cost you £35-£40 pounds each way. The tube service is totally foolproof.. Take the Piccadilly line to Hammersmith , walk up the stairs and then get the District line to Chiswick Park ( 4 stops ). Walk out of the station , 100 metres down the road on to Chiswick high street and Hedone is over the road, you can`t miss it. If you tend to get a bit carried away with the food and wine then obviously you`ll end up missing the last tube home. We ate umpteen courses with matching wines and before we knew it 5 hours had passed and we ended up having to head back into town in a taxi    ( £35 ). I wasn`t happy with this but my dining partner for the night, Mr Criticalcouple decided to take my mind off things with a suprise deviation to The Playboy club on Park lane…and my first ever visit to a casino. The size 10 vintage Cheddar Cheese grin below will tell the story….I don`t need to use words on how my night went.

Beetroot cornets with Smoked Eel….excuse the strange effects , I was playing with photoshop. 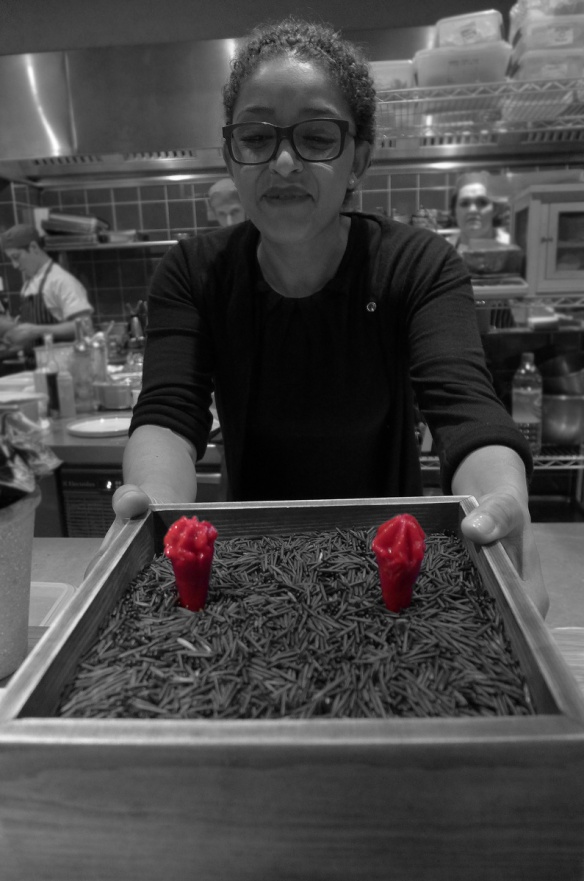 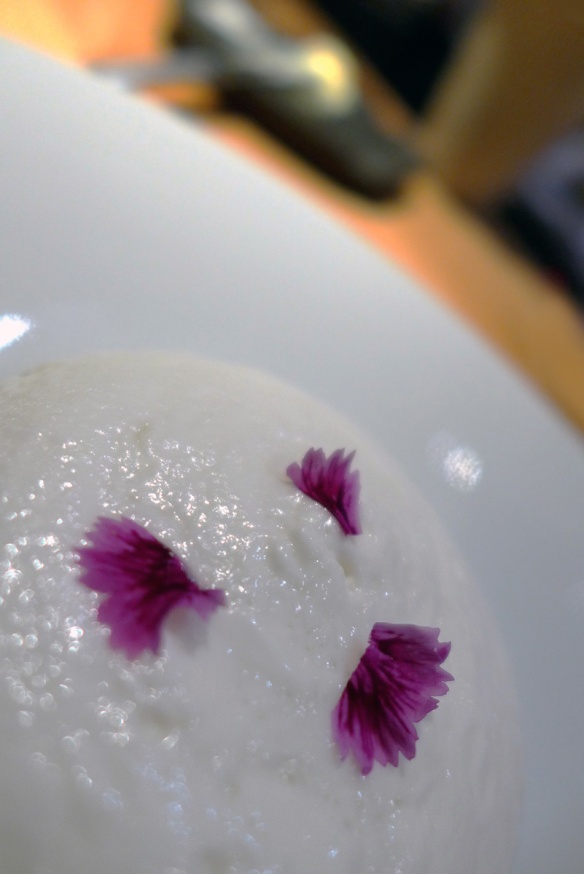 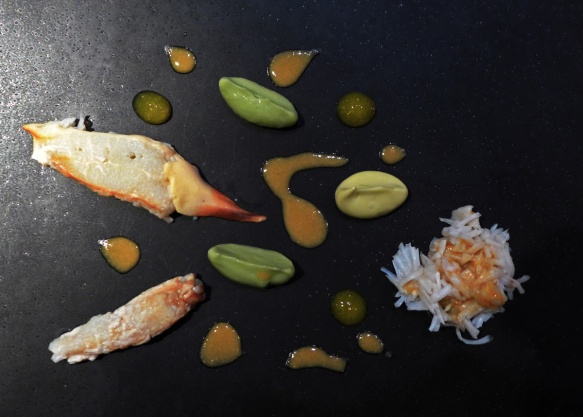 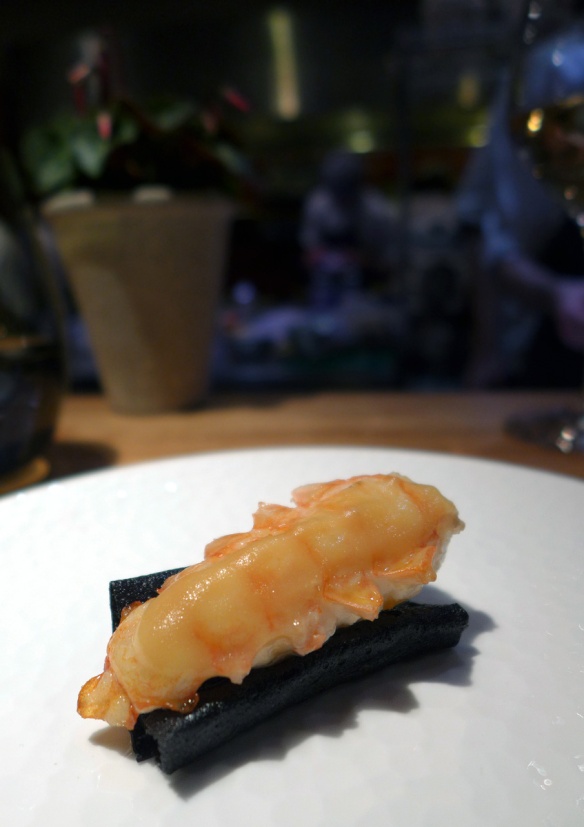 Ahhhh , and now for the controversial Onion course. I`m so glad that Mikael served us this one as it finally served to prove a point that quality and simplicity reign supreme when using well sourced ingredients. We`re talking about an Onion and a Pear here. Unfortunaltely i fell into the negative thinking party after reading comments on the various food blogs.Commenting on something i had no knowledge about. Here was the classic case of “dont knock it until you`ve tried it”. Chef Mikael came to speak with us about the star ingredient , the Cevennes White Onion which actually boasts an Appellation contolee status in France. A few other classic Onion growers actually sent Mikael their own samples and their take on this type of Onion but in blind restaurant taste tests the Cevennes won hands down every time.”There is one Onion and one Onion only for this dish” Mikael tells us and that is the Cevennes.

Cevennes Onions, Williams Pear shavings. Beurre blanc and White Pepper. Apparently this is an even better dish during Black Truffle season but that was 3 weeks away so chef wouldn`t buy until the time was right…. Bahhhhh 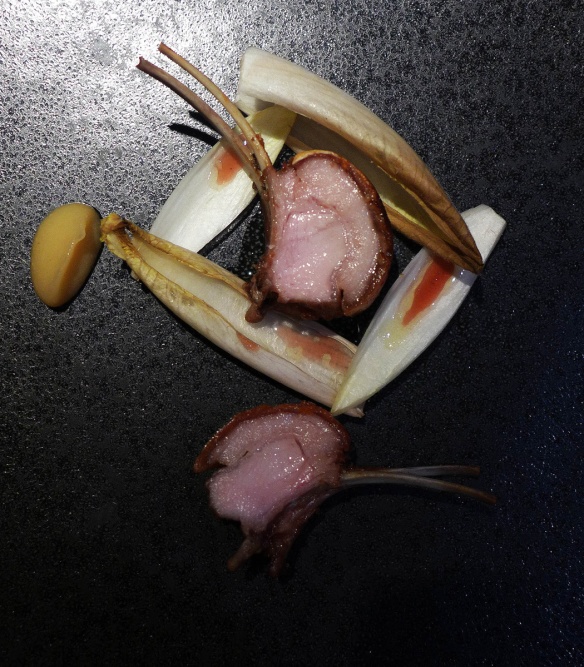 How good is this baby Pig crackling ? …WOW. 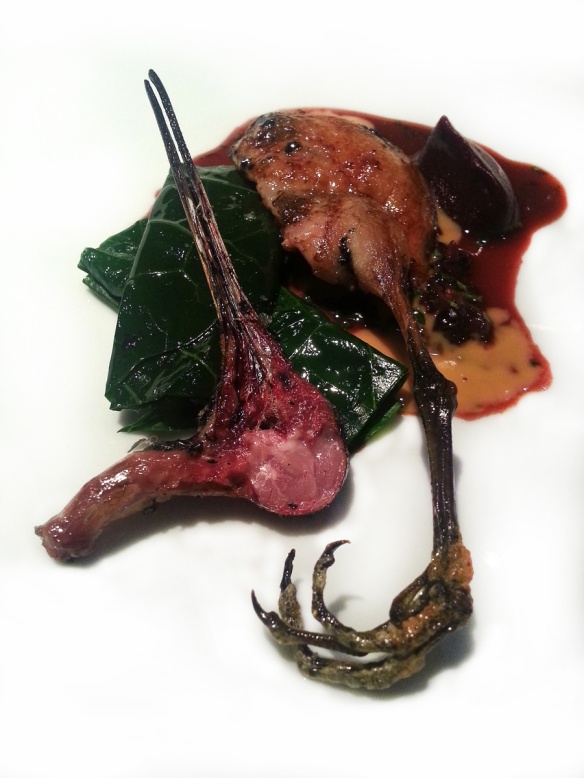 As you can see here….The Snipe is missing an important part of its anatomy….Well I was told to give it a good sucking.

A little tasting of Beef at its very best….This was chef Mikaels supper after service but he just couldn`t resist letting us have a couple of slices each. I`m sure that ill be totally corrected if I`m wrong here but I`m positive chef told me it was from a 15 year old Milking Cow , carefully selected for the taste….if im wrong then blame Mikael for all the wine he was plying me with. 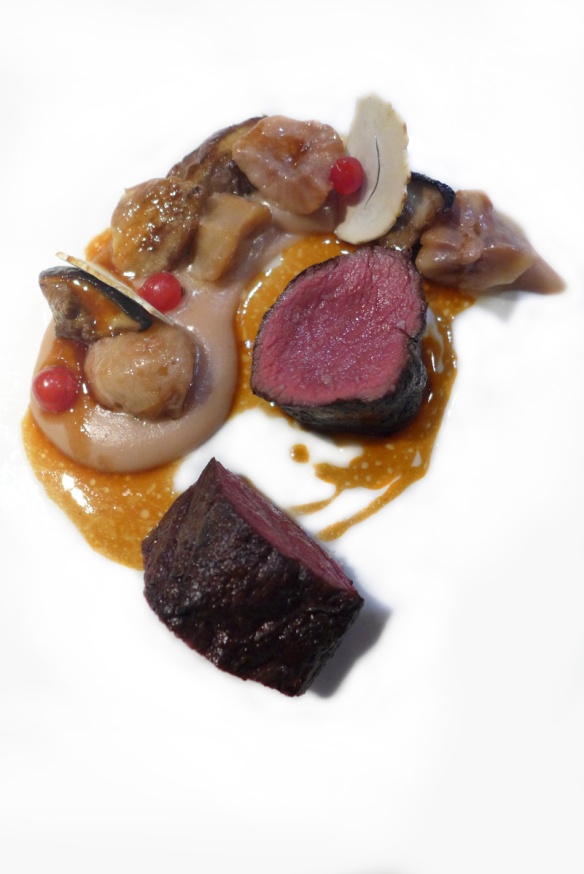 Apple and Caramel Millefeuille , creme pattissiere….and as you can see….Home made Puff pastry….its all done properly here. 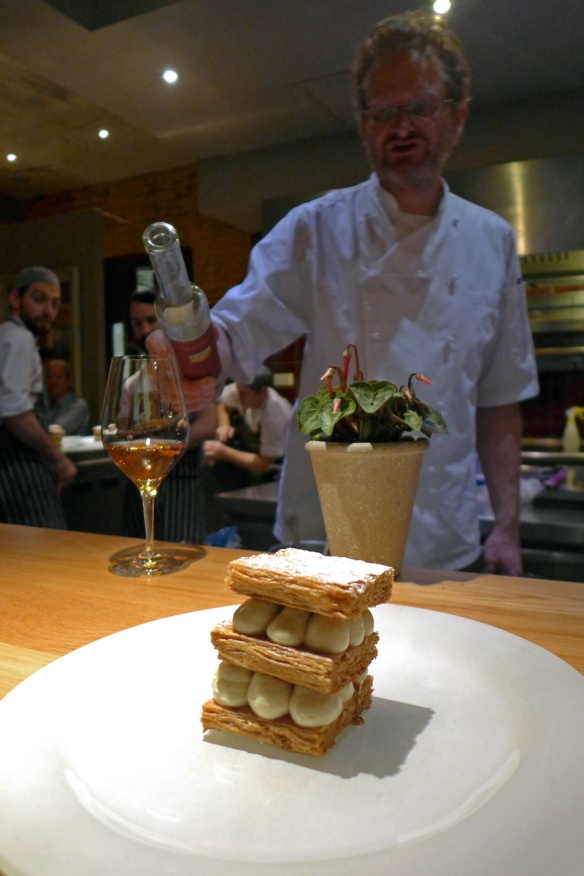 A selection of little sweet treats 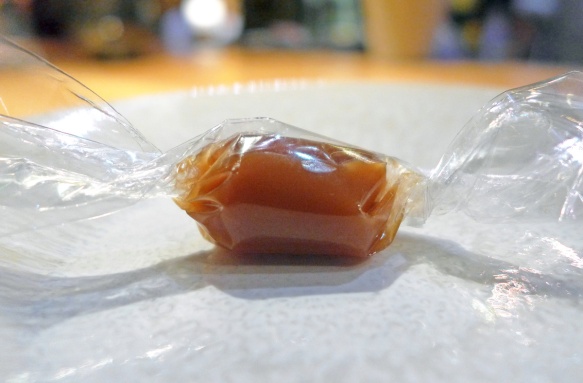 It seems , reading through the various reports on Hedone that Chef Jonsson has been getting his fair share of ribbing over his cooking philosophy and style.Reports that he`s been so obsessed with the sourcing and use of quality ingredients that he has failed to complete and deliver his finished dishes.Personally i can`t see where these people are coming from, maybe i`ve missed something. I have to admit that one week later , i`m still thinking about this meal every day and it will be the first restaurant i eat in the very next time i visit London , I`m very impressed. Chef Mikael is right up my street…he`s ultra passionate about what he does.His love of cuisine has surpassed all levels of OCD and this guy lives and breathes his craft. It was an absolute pleasure to sit down and enjoy our own little trip into the world of Mikael Jonsson and feel just a little bit of the magic that`s going on inside this guys head. Mikael took our order , served us every glass of wine , delivered our plates of food , constructed our menus after a trip to his larder , took our payment and waved us goodbye.As controversial and as crazy as this guy is….I love him to bits , i`m well won over.

Oh and thanks very much David ( Mr CC ) ..awesome evening.

TO VIEW ALL OF THE PHOTOS FROM MY MEAL , PLEASE CLICK HERE