I suppose i tend to take things rather for granted living in a quiet little coastal town on the western fringes of the English lakes.One step out of my front door and i have the most amazing choices and secret little places to disappear to.If i decide to head north then within a minute I`m at the Marina.If i head ten minutes east then i`m at Ennerdale, almost in the heart of the lake district national park.Today i`ve chosen to go south and within five minutes im arriving at St Bees , a very isolated village , coastal escape and beautiful unspoilt beach a short hop from the Isle of Man – well twenty odd miles if you want me to be exact.

Todays challenge – To source some wild bits and pieces from in and around all the rockpools, a few little creatures i can use to accompany the snowy white pieces of Irish sea codling that i was lucky enough to be given off a local fisherman. I remember a few years ago watching the TV chef Rick Stein pulling several huge spider crabs out of a couple of small rockpools.I knew that i wouldn`t be that lucky in St Bees ( or have a well groomed TV crew to sneakily plant them ) so all i wanted was a few Mussels , Clams and sea vegetables to take home and cook with…..

Arriving at the first rockpool i quickly became aware what was lurking in and around the seaweed covered rocks.Oyster and Razor clam shells were everywhere.I`ve never been lucky enough to find local Cumbrian Oysters so that would have been an excellent start.Razorfish on the other hand are in abundance at St Bees and quite an easy catch with the Hi Tech equipment needed ( bottle of salt and a plastic bag ) but unfortunately they`re only available on the real big tides when the sea goes way out and uncovers their little burrows.I`ll leave that story for another time and tide – maybe even give the secret away too. There was also evidence of several other sea creatures in the rockpools , Mussel shells , Whelk shells and also small lightning fast tiny shrimps , perfect to cook up in spiced butter but the trouble was , they were faster than Lewis Hamilton so i gave up on them after two minutes of looking like the village idiot , it just wasn`t going to happen. 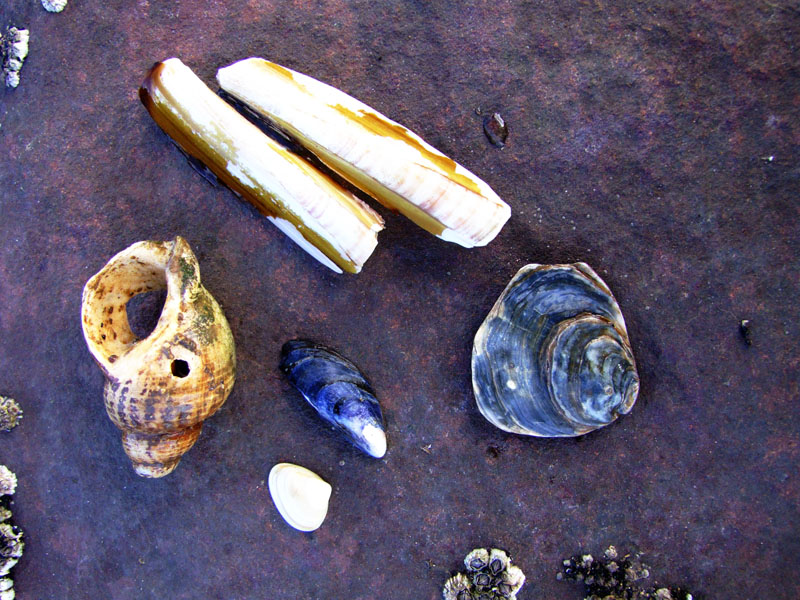 Round the corner there must have been a convention on , a meeting of Cumbrias Gastropod Mollusc community , they were everywhere , small thumbnail sized shells containing sweet Periwinkles – Also known as Winkles , Crickles , Willicks , sea snails or if you`re local to my area – Cuvvins.

Iremember baulking as a child when my grandad pulled a cuvvin out of its little shell home with a needle and stuck it in my mouth , an experience similar to the first taste of an olive or anchovy – bloody horrendous , and so forty odd years later i decided to give a couple of dozen of the little creatures a bath in boiling water and try them again.There was also hundreds of Limpets around but even the crazy Hugh fearnly whittingstall wont even go there so i left them well alone , apparently it`s like chewing on a fishy piece of carpet.

All in all i ended up heading home with my winkles well intact , a small amount of small sweet mussels , cuvvins , and a nice bag of Sea Beet / sea cabbage  / sea kale or whatever it`s called.It definitely looked very edible and i was sure that Hugh had foraged some of it on one of the River cottage progs a while back. 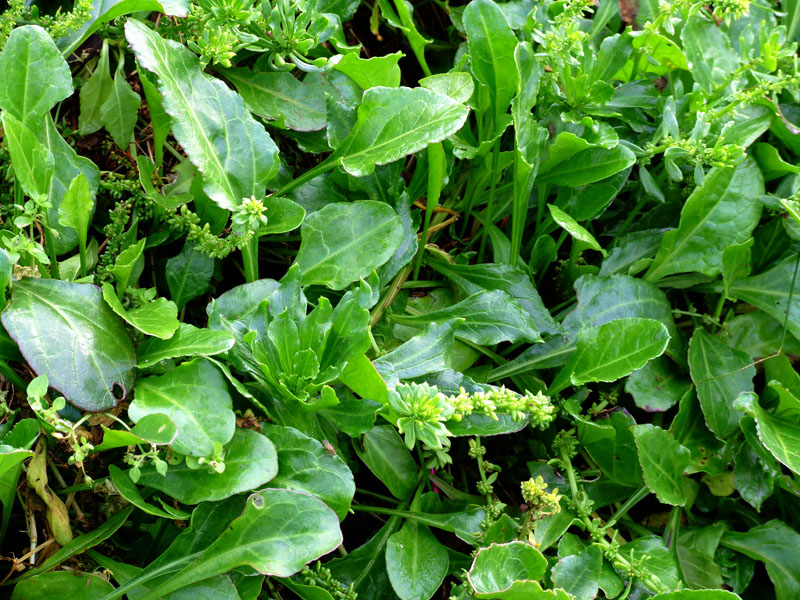 So before i head off home with my “catch of the day” now seems like a good time to share some of the pics i took whilst practising gymnastics on the rocks – Enjoy , then we`ll cook.

Spot the fly that had to get in on the act. 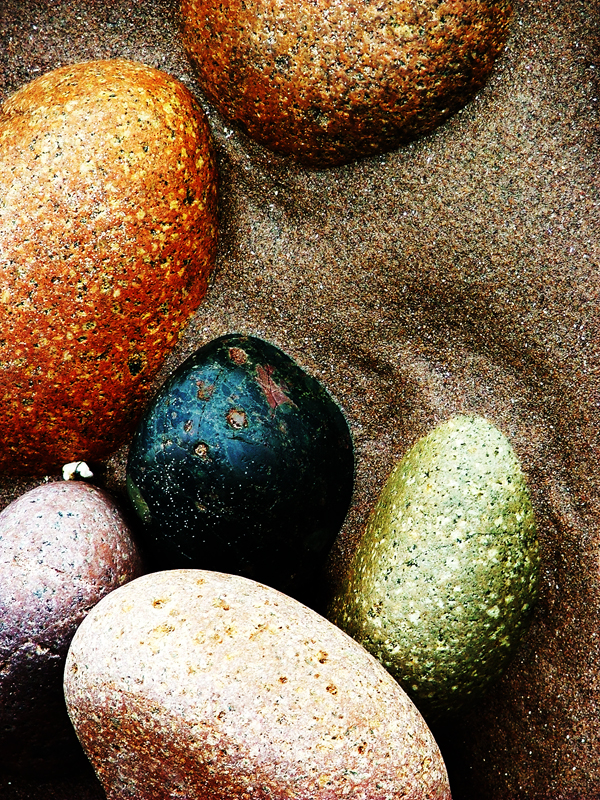 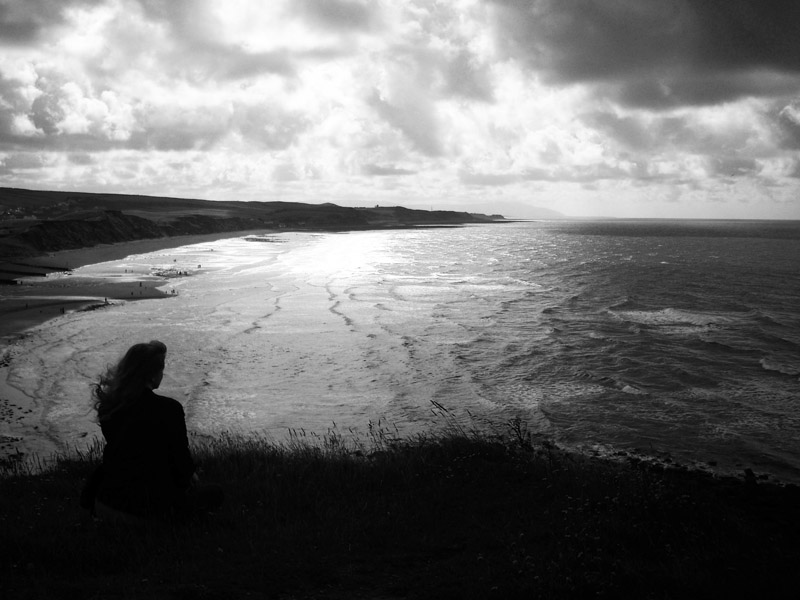 Enough of the scenery and on to the food , cooking a half healthy meal from a few bits n pieces. I trimmed the codling up neatly and decided to simply steam it over a scented stock made from Celery , Parsley stalks , and a splash of white wine.That was going to take about six minutes and i also cooked the mussels and cuvvins in the stock while the fish was steaming above.Halfway through the cooking time i added the Sea Beet to the steamer, three minutes was enough to wilt the leaves and keep a little bite as well as retaining the glorious green colour to the sea veg.

As for a sauce , and it had to be a quick sauce too.I sliced up a couple of small cooked potatoes from the fridge and added them to some extra virgin olive oil in a small saucepan.I added skinned tomato flesh and semi dried tomatoes , sliced preserved lemon skin , black olives and chopped parsley also.The whole lot was then gently warmed for a couple of minutes over a medium heat for all the flavours to infuse together.It`s pretty important not to start cooking the sauce but just to let all the ingredients warm nicely through.Oh and the finished dish of the day looked and tasted wonderful…erm and as for those Cuvvins – One was enough once again and ill get stuck into my third one in another forty years time.