Having a Czech girlfriend aint easy , infact it can be pretty tough at times.The first problem is the obvious one – “The language barrier” , i can speak very few words of the Czech language, luckily in my case Sarka can speak English virtually word perfect, plus she also subscribes to Viz magazine….so readers of the mag can only imagine her Czech/English translations of Sid the sexist and Biffa Bacon and how it helped Sarkas understanding of the English language……..enough said.
Secondly there`s “The cuisine” , now I love my English food , Fish n chips , Sunday roast , full english brekkie whilst Sarka loves her Cabbage , her pickled beetroot and is constantly in Dumpling heaven – Dumplings and poppyseed cake for breakfast , Dumplings and beef for lunch and Dumplings warmed up with more cabbage and beetroot with a side serving of boiled beetroot and shredded cabbage for dinner……Mmmmnnn.
Thirdly there`s ” The hobbies”  –  Archery,  and being a guy then i can get away with that one ,  that`s acceptable .Then there`s  Shooting shotguns , remind me never to fall out with her and here`s why….http://www.youtube.com/watch?v=A7qpxdoyDKU ….. and finally,
…..Wait for it  …..
…….Visiting Cemeteries…..Oooooh dear ,  obviously this is a bad one and something that people from Prague do in their spare time. Sarka had been doing regularly it for years. Once we had been dating for a few months she carefully dropped it into the conversation one weekend and then sat open mouthed waiting for my reaction…….It was just one of … “Oh…right “, followed by strange stomach rumblings , nervous laughs and thoughts akin to “Oh dear , what have i let myself in for” ?
So anyways … long story short , Sarka got dragged into my normal Englishmans very normal hobbies so i thought it fair and best to have a go at hers also.I didnt get around to trying the Archery but managed to have a go at the shooting …pretty exciting stuff ( and the pub crack was great afterwards too)
I also gritted my teeth and ventured into my local cemetery for a “little stroll” one sunday afternoon. All in all it was what i would have expected from a cemetery , peaceful ambiance , birds singing ,and a lovely walk.It was a really ancient graveyard with trees of every description, flowers , plants, and also quite a large amount of Wild food, which got my creative mind thinking and conjouring up what i could possibly make from a “Trip to my local Cemetery”…..Maybe Sarka wasn`t so nutty after all.
So here we go , a Saturday morning stroll out on my own into the old creepy graveyard….with no one to hold my hand either.Camera in one hand and plastic bag in the other and a challenge to see what i could possibly find growing wild in late October to make back in the kitchen and with a festive twist.

Normally around this time of year everything is beginning to die back.The first frosts of Autumn have already started  turning the leaves into their glorious ambers , browns and yellows and sending the fruit trees into winter hibernation mode.Any berries left on the trees start to wither and only last a matter of days once the minus degree temperatures hit them.Luckily on this occasion the Elder bushes still had the most amazing bunches of fruit still in perfect condition – so there was my first produce for the bag. 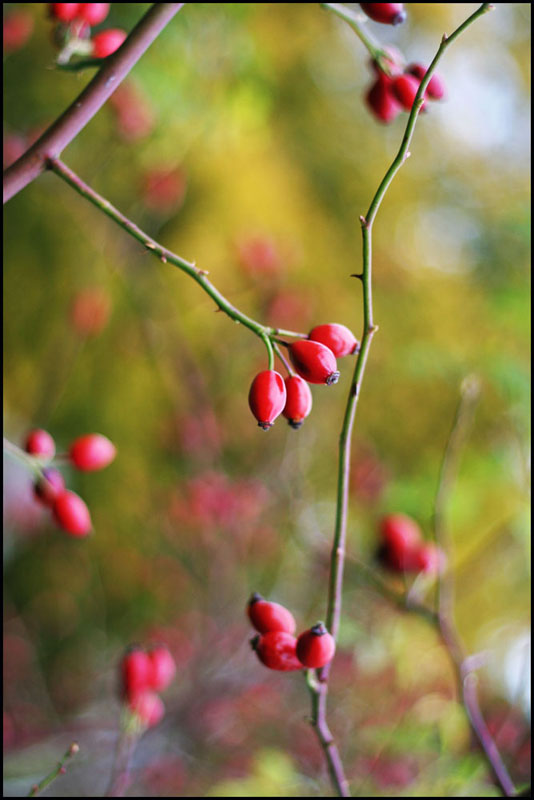 A short stroll through the trees and first thing that jumped out was a huge bush of wild rosehips , no leaves on the branches either as they had all fallen away and left only the fruit to collect.The people in the know reckon that the best time to pick wild rosehips is always after the first frosts as the cell walls of the fruit are broken down , gone soft and able to release more flavour.I only needed 2lb of fruit to make Rosehip syrup / jelly so i managed to get that amount in no time at all, there was enough for man and beast.

I noticed during my walk that there was quite a few Douglas fir trees around , they`re the ones that smell highly of scented pine when  the soft needles are rubbed into the hands.I used these shoots years ago (when no one else was using them at the time) when i got my 30 minutes of fame on a channel4 programme “Chef for a night”.I took on the challenge of taking over a Lake district restaurant and cooked up an 8 course gourmet meal for 50 paying guests.Thinking that i was doing something a little different at the time i made up a main course of local farm chicken steamed over new seasons pineshoots.Roy Ackerman was the presenter and critic , he gave me thumbs up and everything worked out really well…..but pineshoots never did become Haute cuisine after that….until .Simon Rogan , my good friend and crazy chef of L`enclume Restaurant in Cartmel started using Douglas fir shoots to flavour his Milkshakes with…..Theres my seal of approval for the future firmly in place and my “pine shoot pannacotta” was born.
So there we go….Three ingredients from my wander around the cemetery , Elderberries , Rosehips and Douglas fir shoots.From them i would make an Elderberry puree , garnish and poaching ingredient for some pears that id bought.The rosehips would be used to make a syrup and jelly with , also i`d use a few larger ones to “candy” in the rosehip syrup.The pineshoots would be used to flavour some milk which in turn would be used to make the Pannacottas.
And so before i head back off to the kitchen who`s gonna tell me that the Cemetery isnt a spooky place ? ( Apart from the strange Czech girl) …Take a look at a few pics before we get cooking. 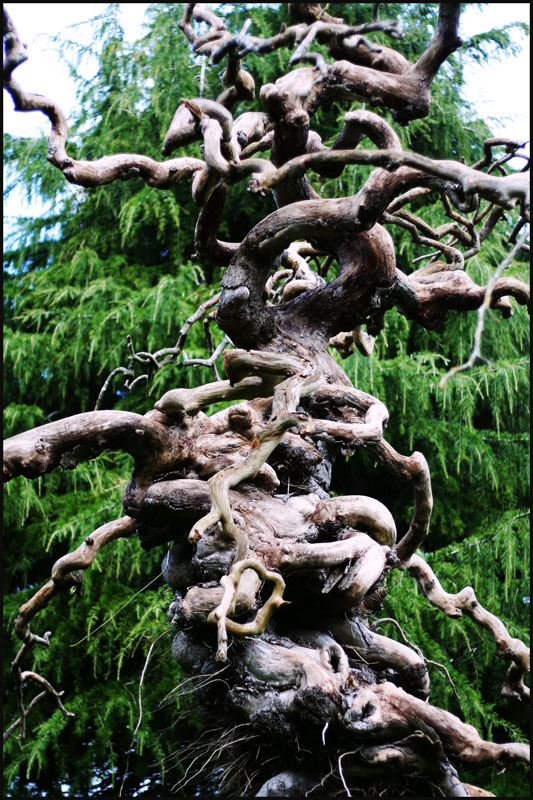 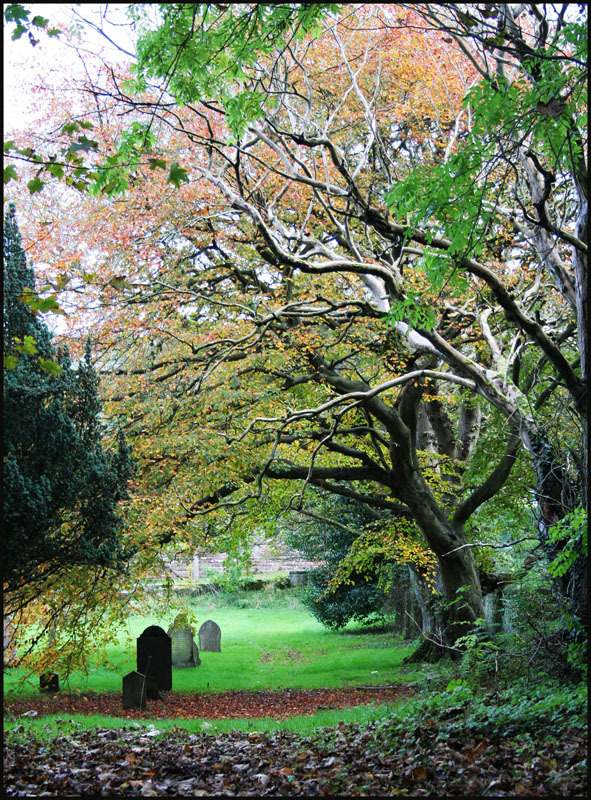 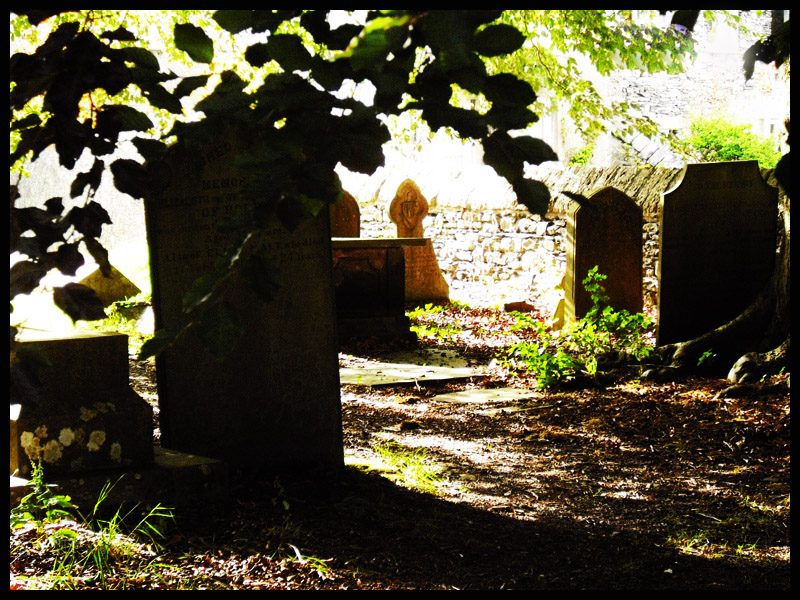 So here`s the days gatherings for the dessert.I had constructed the finished dish on my way to collect the other bits and pieces from the local supermarket.So once all was sorted i headed back to my kitchen to put everything together into my xmassey Autumnal “Dessert from the local cemetery”. 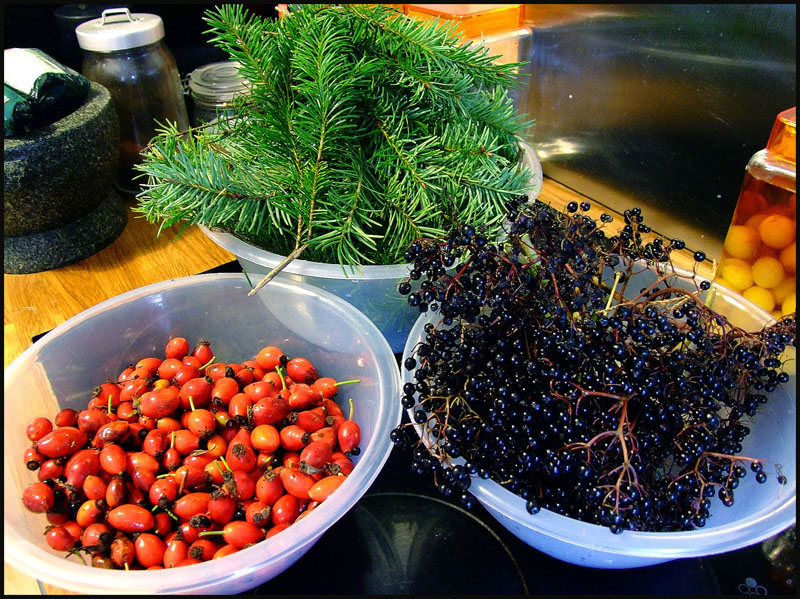 Everything was washed thoroughly in water , then dried. I decided to poach the pears in a red wine and elderberry stock , sit those on caramelised clementines.Bake some 5 spice shortbread fingers and finish it all off with a Rosehip and Douglas fir pannacotta.The list of components for the dessert would be –
Poached pears
Caramelised clementines
Reduced cooking liquor from the pears
Rosehip syrup / Rosehip jelly
Douglas fir ( pine ) pannacotta
Elderberry sauce
5 spice shortbread
Garnishes of candied Rosehips , elderberries , Pineshoots and candied rosehips.
The Pears were all peeled leaving stalks intact.They were placed in a pan and a little Port , damson gin , sugar , Bay leaf , cinnamon , and one star anise were added.Half a bottle of red wine was poured over the pears and topped up with a little water to cover the fruit.A circle of greaseproof was placed on the pears and weighed down with a small plate.The pears were brought to the boil , immediately turned down to simmer and left like that for approximately 45 minutes until a knife could be inserted with no resistance.They were then left overnight in the liquid to cool.The colour was amazing when the pears were revealed next morning and they were carefully removed into a dish and covered.
The remaining poaching syrup was put through a fine sieve and then reduced slowly down until a nice highly flavoured sticky syrup remained.This was allowed to cool.

The shortbread is pretty straight forward to make , it`s just the traditional butter recipe but i also added some semolina for a better texture.Anyone wanting the recipe then please just ask.
The photos below just show the various stages in simple shortbread making.The dough is rolled out to just under a centimetre thickness.It`s then cut to size, in this recipe i decided to make shortbread fingers. 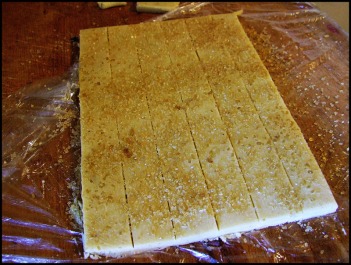 Just before it goes in the oven it needs a sprinkling of Demerera sugar.The shortbread is then  placed on a non stick baking mat and cooked at 190 deg for approx 15-20 mins. 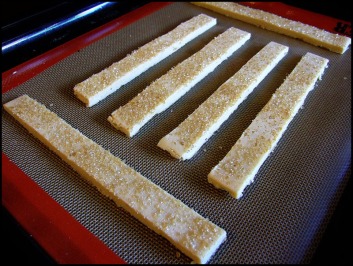 Once removed from the oven the shortbread is dusted with caster sugar and  5- spice powder then allowed to cool on racks. 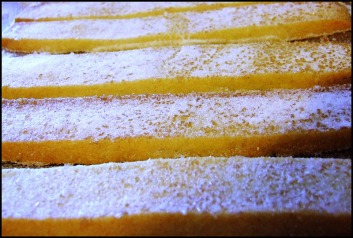 The finished shortbread can be cut to shapes or lengths once cooled.

The Rosehip syrup reducing down and the flavours concentrating.I took some of the syrup out at this stage and sweetened it with sugar to taste.I then added gelatine and carefully poured it into the small shot glasses which were set at angles in old egg boxes.Once cooled down these jellys were allowed to set in the fridge for a couple of hours to keep their shape when they were straightened up again.

Here the jellies have just come out of the fridge and are now ready for the pannacotta mixture to be poured in. 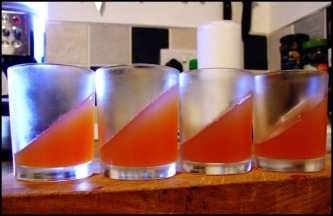 The cold Pannacotta mixture is carefully poured into the shot glasses and then replaced into the fridge to set for a few more hours or overnight before being topped with the Elderberry coulis.

Well here`s the finished dessert and i`m really pleased with the taste combinations of all the various components….very festive too , so it might be getting knocked up on xmas day this year.
As for the photography , once again Ive used 2 cameras.The first shot is with my £250 Fujifinepix S9600 and the shot below is with the £900 Canon EOS 350D…..Not a lot of difference really.Most of the fuji photo is very much in focus while the Canon lens and short depth of field threw the background into an effective blur.Some cookery books like Alinea have nearly all of the shots with blurred backgrounds.Others , such as “The fat duck cookbook” are mostly pin sharp everywhere.The Jury is still well and truly out on the Canon and the choice is still hanging over its future….I may get a decent lens and give it one last shot……Or make it a one way trip to the ebay cemetery. 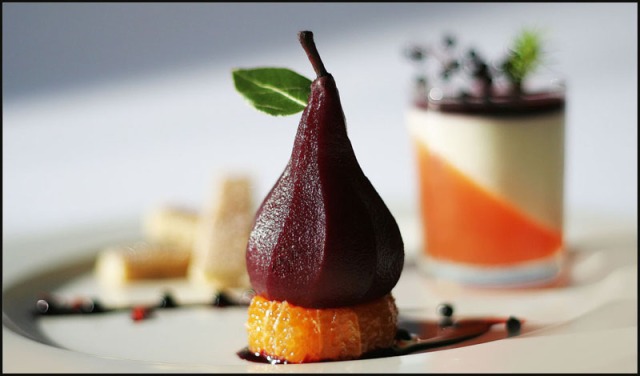 Footnote – Any resemblance between Sarka and Sonia Partridge are purely coincidental. http://www.youtube.com/watch?v=skvOs6Yj7Nc