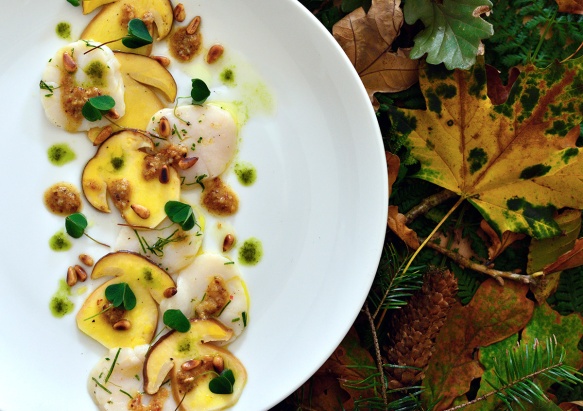 I forage for it , i cook it , i style it , i photograph it  and then finally i can eat it .If the truth be known then the latter is probably my favourite part of the exercise. The whole process can be a pain in the butt and  takes a full day of my valuable weekend off work but once the dishes are washed and everything`s completed  it`s then rather rewarding looking over the results on the computer. This one started totally out of the blue. I`d finished work on the friday lunchtime and headed up into the mountains for a 5 mile run. During my circuit and as i passed through the forests i noticed far more fungi than there normally was at this time of year , they were everywhere but unfortunately all inedible varieties. We`ve been having a bit on an Indian summer here in West Cumbria and the average daily temperatures are 10 degrees warmer this year which no doubt accounts for the late flush of Fungi. I had a little feeling inside that if there were this many mushrooms around then my number one secret location must also be laden, and so off i went to have a little forage. I was only 10 metres from the car when i got straight into my first batch of Ceps ( porcini ) , prime specimens only a few days old. A few metres further on and i stood open mouthed in amazement….. Jeeeeeeeez man , they`re everywhere. I actually counted 42 Ceps growing around one tree alone. 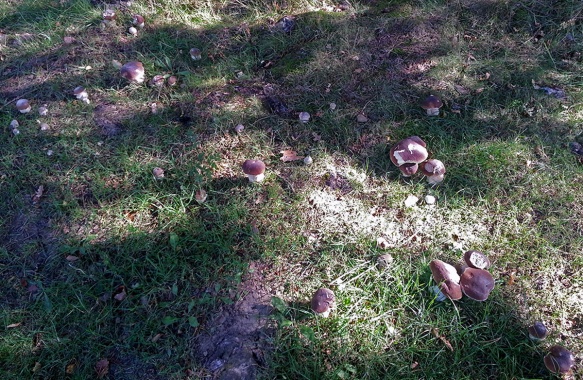 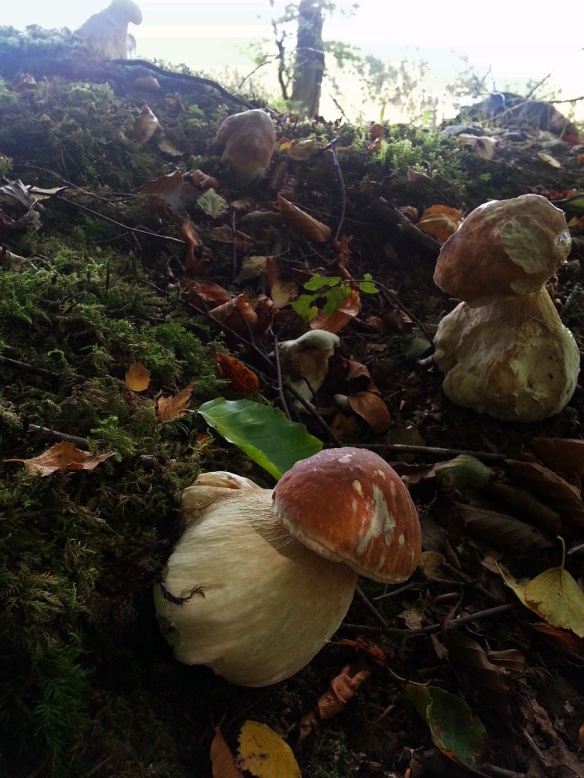 Ceps , according to the experts normally like to grow near Silver Birch but this woodland was mainly coniferous so bang goes that theory. I ended up picking what i could carry back to the car and then returned for the same again. I actually left more than i took home with me and at current market prices of  £88 a kilo…wow.  I gave half to a friend for his restaurant and kept the rest for drying.The fungi that you can see below are all 1 , 2 and 3 days old , no more.The ones at the bottom of the photo are slightly different , these are Brown Birch Bolete mushrooms and they`re pretty foolproof to identify. They`re also very edible fresh or dried. 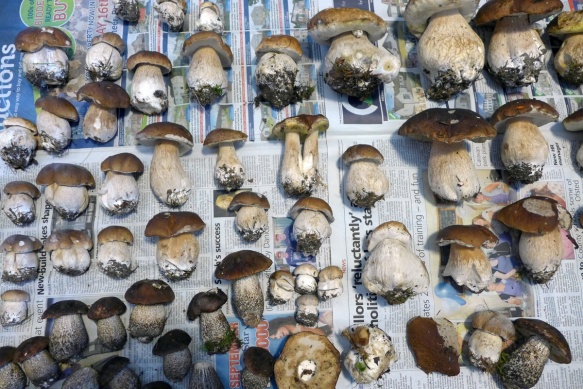 This stunning specimen below was as solid as a rock , heavy and in prime condition.I would reckon about 3 days old. I sliced this one up for drying and it`ll end up in either a wild Porcini Risotto or a cream sauce to accompany some free range Chicken.The flavour of a Porcini cream sauce is one of the highlights of the gastronomic world. 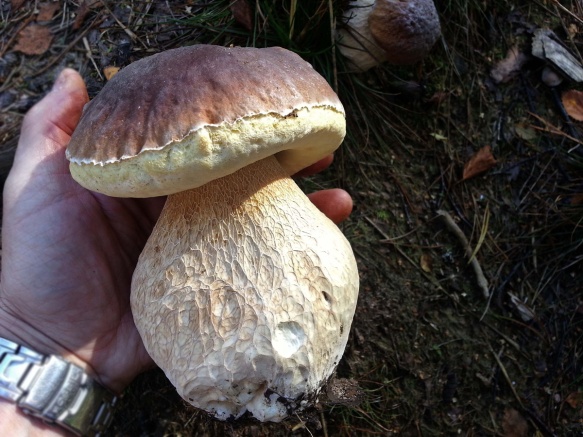 The prime Ceps , the little baby one day old specimens i kept for this recipe which would be my own take on the one i ate at Massana in Girona a few months ago. 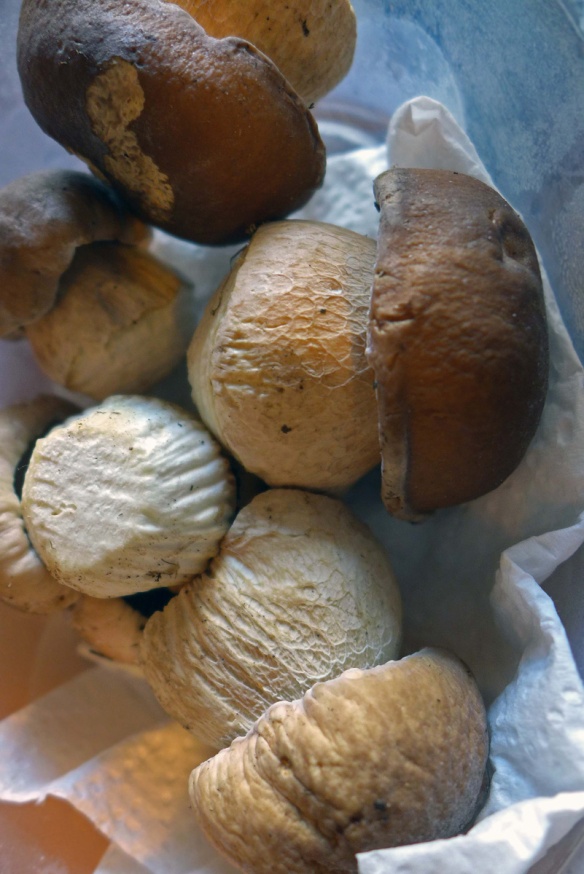 The flavour combination of this recipe is totally heavenly on the palate.  Wild Mushroom , Trufflle , flavours of the Sea balanced up gently with a smokey Pine nut vinaigrette , Scents of  Douglas fir forests and the tangy kick of freshly picked Wood Sorrel.

So to start the recipe off I gently dry roasted 80g of Pine nuts in a cast iron pan. They have a lovely flavour as it is but once roasted they take on a whole new taste. 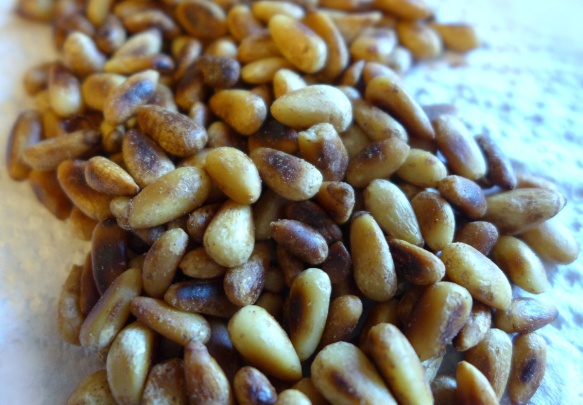 Put 120ml of Cider vinegar into a pan along with 1 1/2 tablespoons of Honey.Reduce this down until only about 1 tablespoon remains.

Finely chop 1 Shallot and add it to a bowl along with 2 tablespoons of Cider vinegar , Salt and freshly ground pepper.Let this sit for 10 to 15 minutes.

Crush the Pine nuts roughly between two pieces of kitchen paper with a rolling pin. Stir the vinegar reduction into the shallot mixture and then whisk in 60 ml extra virgin Olive oil. Add the crushed Pine nuts to the vinaigrette and season to taste.

Fresh Douglas fir shoots carry the most delectable fragrance. It`s a shame it can`t be bottled.I`ve been steaming Chicken over these for years now and it`s nice to see that finally they`re part of modern day cooking. My friend Simon Rogan from Lenclume restaurant infuses the shoots with milk and makes the most fantastic Douglas fir Milkshakes to go with hot Donuts at the end of a meal there. 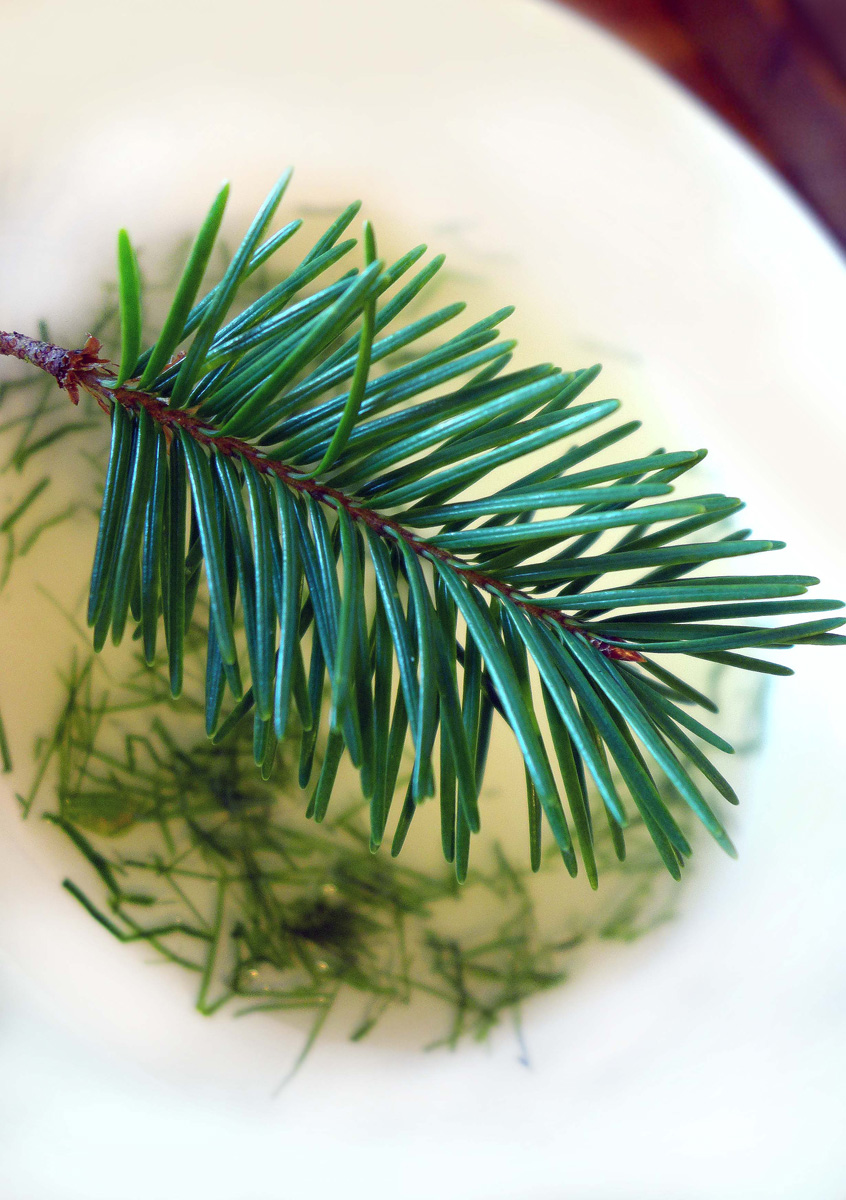 Wild Wood Sorrel grows right throughout the Spring , Summer and Autumn months in woodland all over Europe.It`s really easy to identify by its heart shaped leaves which fold up on themselves after picking.They carry an acidic Citrus flavour which accompanies fish beautifully. 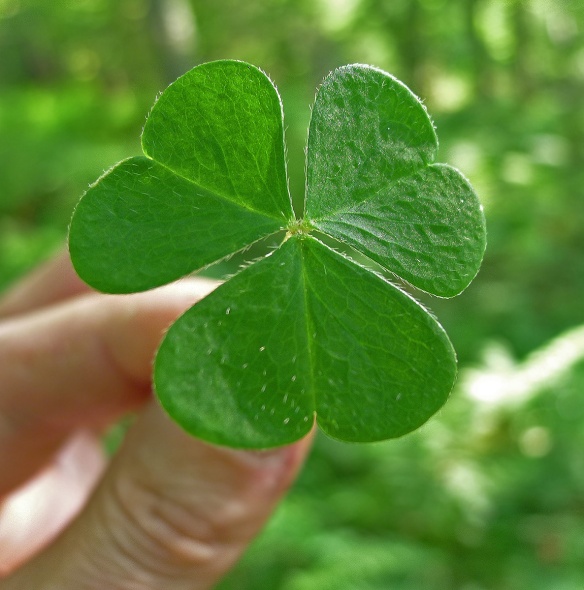 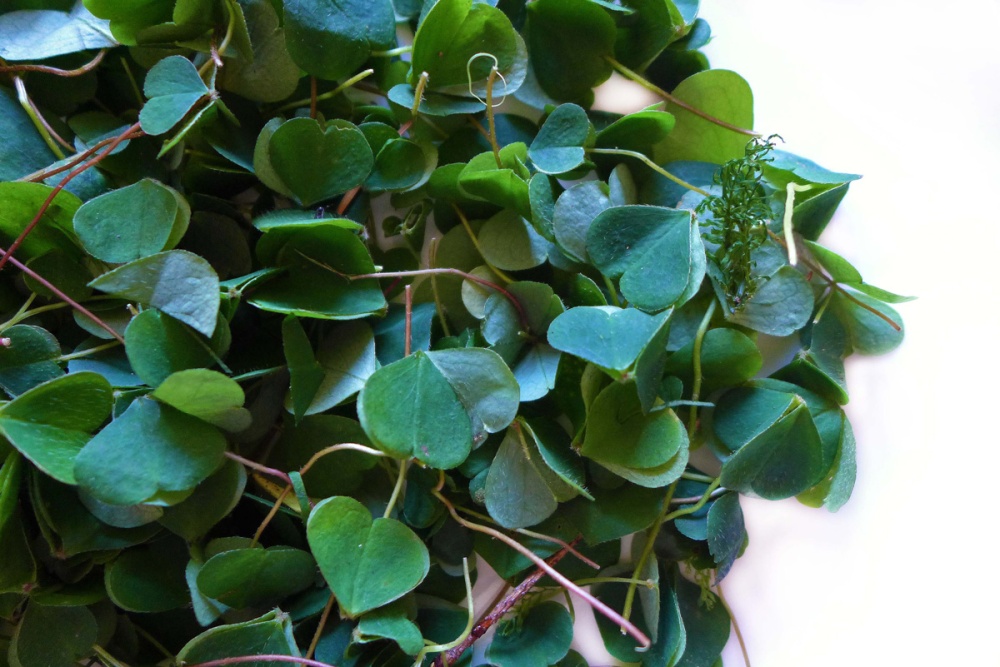 To make the Wood Sorrel dressing it was basically a case of trial and error. I took a good handful of fresh Wood Sorrel leaves and blended them with a spoonful of Cider vinegar , a spoonful of honey , salt , pepper and Olive Oil ….I just added and tweaked until it tasted right….No rules , just fun. 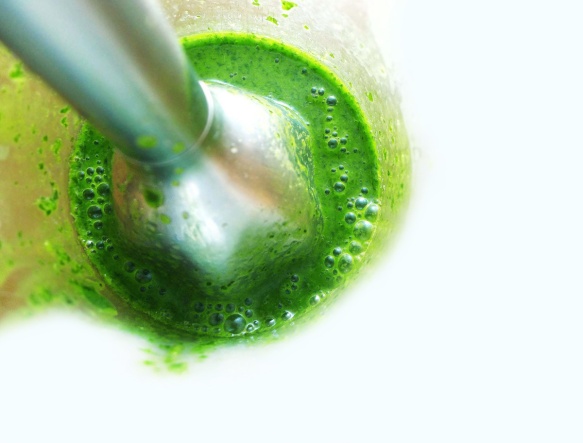 The Prime Isle of man Scallops landed at Whitehaven , straight off the boat and into the harbour shop.They`re so sweet they can be eaten raw and so that`s exactly what I decided to do with them. I bathed them very gently in the marinade below for 15 minutes.The citrus fruit acids actually cook the Scallop meat and this is also known as Ceviche.I chopped a little of the Douglas fir sprigs into the marinade to add a delicate perfume of Pine to the thinly sliced shellfish. 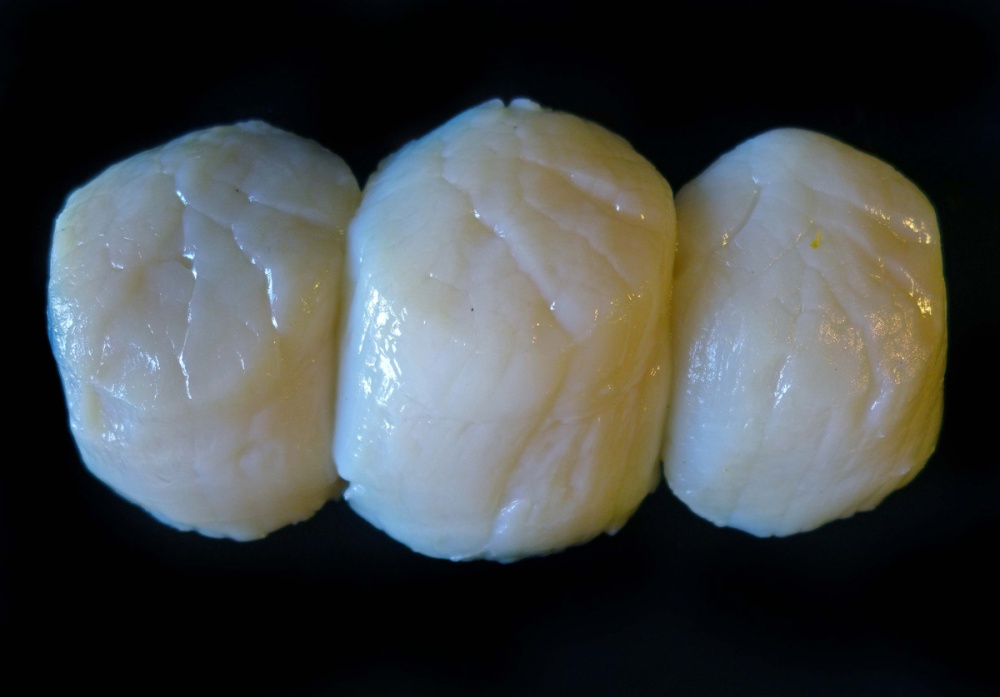 Take the juice of 1/2 Lemon and 1/2 a Lime , add a splash of Extra virgin Olive oil , Salt and Pepper. Mix in some very thinly sliced Wood Sorrel and finely chopped Douglas fir shoots and there you have the marinade for the Scallops. Slice the Scallop meat finely across the grain and lay the slices into the marinade. 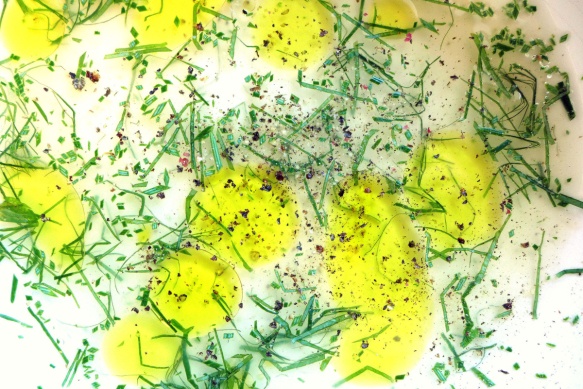 You can see here that after only 15 minutes sitting in the marinade , the Scallops have actually been cooked by the acids in the Citrus fruits. 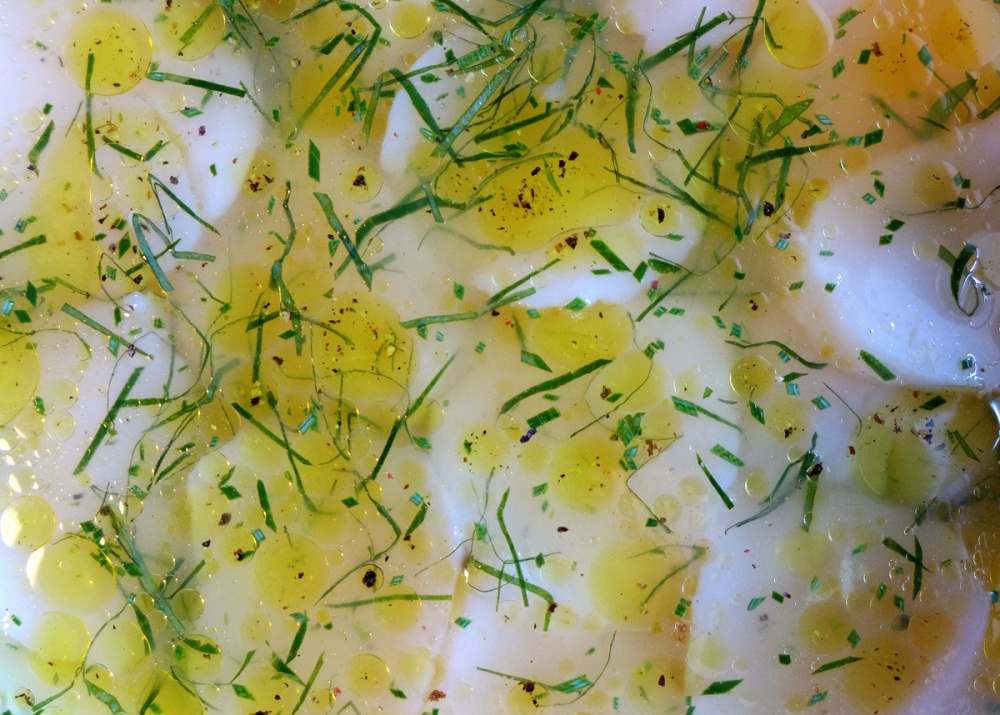 The marinade for the Carpaccio of Ceps is a simple mixture of 6 Tablespoons of good quality English Rapeseed oil , The juice of 1 Lemon , Sea salt and mixed peppercorns. Gently whisk the ingredients together and then add the thinly sliced mushrooms.Let them sit in the marinade for 15 to 30 minutes to soak up the flavourings.The mushrooms are similar to sponges and when left alone for a while they`ll soak up the marinade and take on the flavour of whatever liquid they`re sitting in. 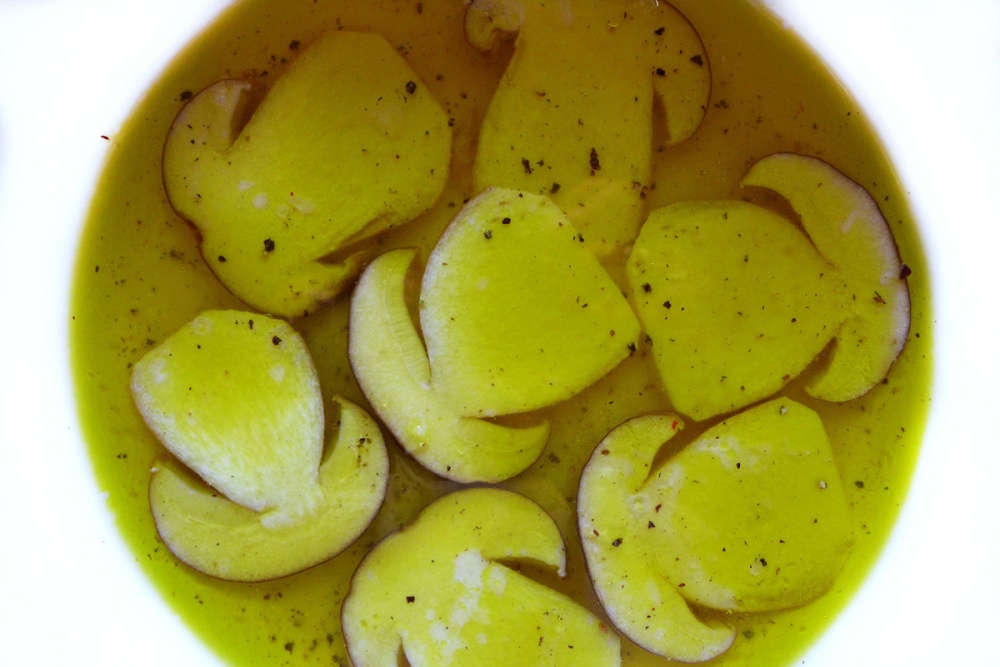 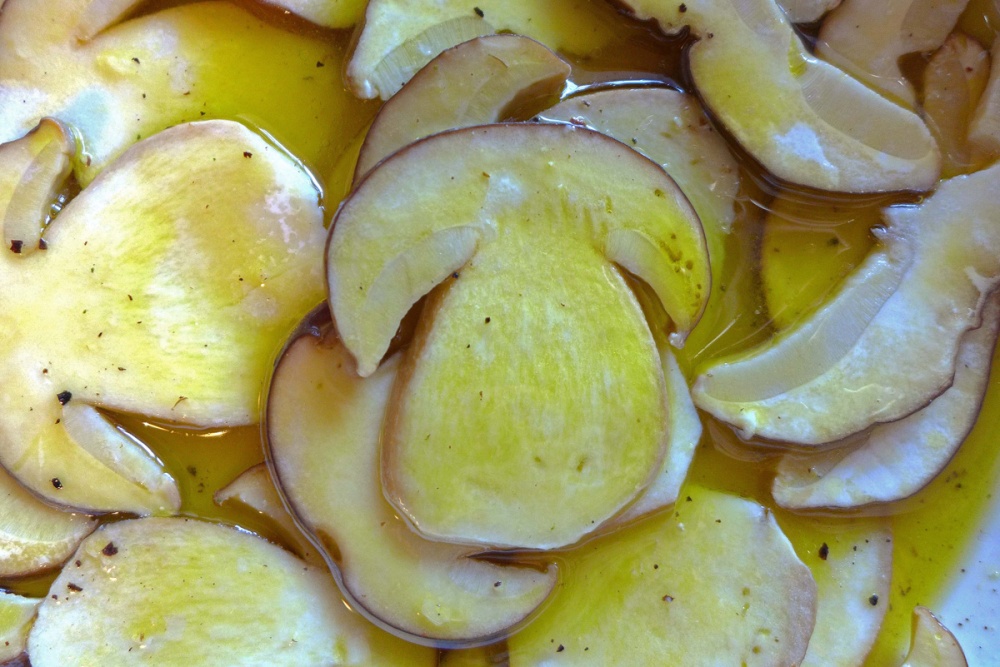 Here`s the final result and a lovely little seasonal Autumnal starter.Carpaccio of marinated Cumbrian Ceps ,Douglas fir infused Isle of man Scallops with Roasted Pine nut vinaigrette and Wood Sorrel dressing. To finish it off perfectly I added White truffle oil which took the dish to a whole different dimension. 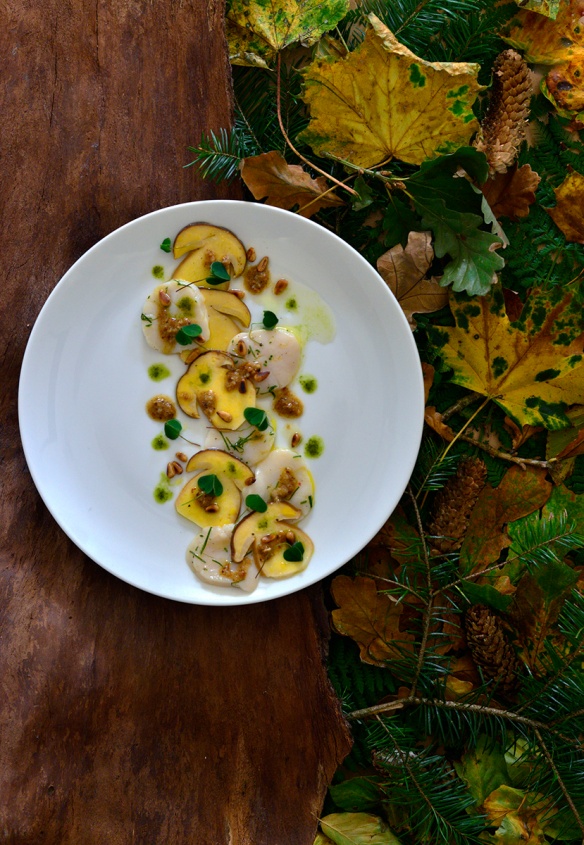 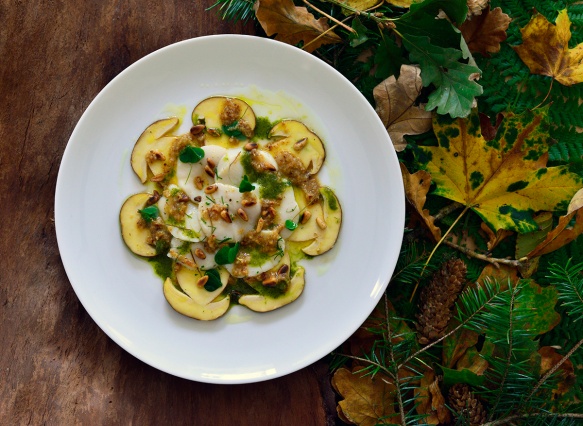