Reblogged from 2011  –
I`ve reblogged this post as it`s head and shoulders above my other posts as the most popular one on Cumbriafoodie. Seems like Heston has spread his wings worldwide as I have requests and messages from Australia , Thailand and USA from home cooks making Meat fruit. With Xmas just around the corner now is as good a time as any to go buy the ingredients and try this yourself at home. You certainly won`t be disappointed , it`s one of the best appetisers of all time. I`ve now eaten it 3 times at “Dinner” in London and every time it just blows my mind…. superb.
…………………………………………………………………………..
The recipe is in 2 parts ,the first part being the pate and the second the Mandarin jelly. I based it all over a 6 day period , start to finish with a little something to do each day so i`ll write the method up using the 6 day format.
Here`s what you`ll need to make the Chicken liver parfait.The recipe makes 6 portions with the moulds that i used.
100g of Shallots – finely sliced.
3g of minced garlic.
15g sprigs of fresh Thyme, tied together with string
150g of Dry madeira
150g of Ruby Port
75g of White Port
50g of Brandy
18g of table salt
400g of Chicken livers ( trimmed weight )
240g of beaten eggs
300g of unsalted butter.
DAY 1 Place the Shallots , Garlic and Thyme in a container with the Madeira , Ruby and white Port and the Brandy and set aside overnight ( or up to 24 hours ) to marinate. 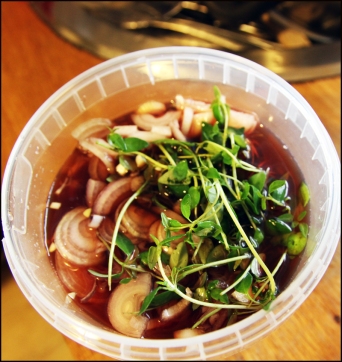 DAY 2    Heat the marinated mixture in a small saucepan until almost all of the liquid has evaporated and approximately only a tablespoon or so remains. Stir regularly as the liquid is reducing so nothing sticks and burns on the bottom of the pan. Remove from the heat and then discard the bunch of Thyme. 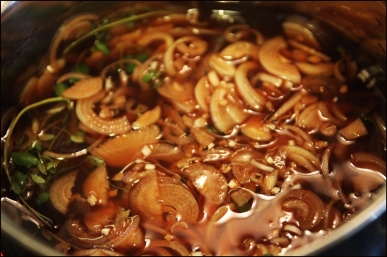 Preheat the oven to 100 deg C , fill a bain marie with about 5 cms of warm water and place into the oven.Get a large pan of water and place over the heat until it reaches a temperature of 50 deg C , regulate the heat until it stabilizes at this temperature. Sprinkle the table salt over the chicken livers and then put them into a plastic freezer bag and tie in a firm knot.( make sure all of the air is out of the bag before tying ).
Place the eggs and alcohol reduction mixture into a second bag , remove the air and tie tightly again.
Place the butter in a third bag , remove the air and also tie this bag very tightly.Place the three bags into the water bath for 20 minutes, keeping the temperature at 50 deg C. 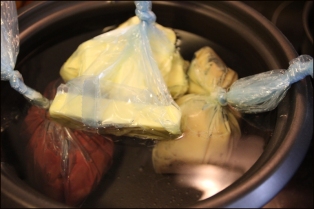 Remove the bags from the water bath , cut them open and place the contents of all three bags into a plastic container ( or a food processor ). Blitz them on full power until they reach the consistency of a fine puree. 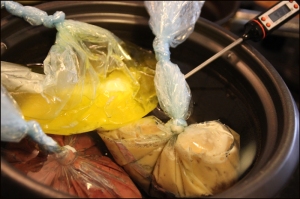 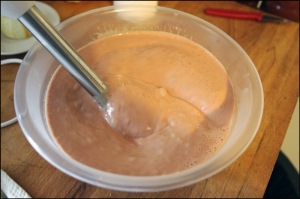 Pass the mixture through a Chinoise or a fine sieve to remove any stray pieces and sinews. 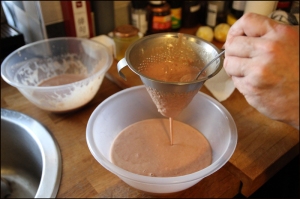 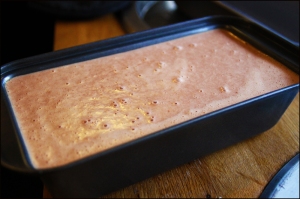 Pour the parfait mixture into a terrine dish or in my case , a non stick loaf tin. Tap gently to settle out any bubbles and then cover the parfait with silver foil. Gently carry this to the oven and the waiting water bath. Cook gently in the oven until the internal temperature of the parfait reaches 64 deg C. I used a digital probe thermometer for this and it took approximately 1 -1/4 hours at 100 deg c to reach this temperature.

Once cooked , remove the parfait from the oven and then allow it to cool. Transfer to the fridge and allow to firm up for 24 hours.
DAY 3 – To make the fruits , using a spoon , scoop out the pate and use it to fill the half dome moulds.I got these moulds off ebay, they`re made of Silicone and slightly on the large side but i`m happy to eat large Mandarin size Pates any day. 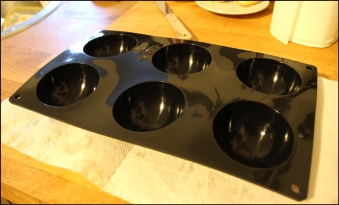 Level off the tops of the moulds with a spatula to make them as smooth as possible. Don`t forget that the 2 halves need to stick together perfectly so take care in levelling them. Place a piece of plastic wrap gently over the surface of the parfaits and place into the freezer to solidify into shape until completely frozen.
DAY 4 Remove the Silicone moulds from the freezer and carefully unmould the Parfait halves. Gently heat the flat surface of one half with a blowtorch to slightly melt the frozen pate and press the 2 halves gently together. Cover the ball with cling film and twist together tightly to seal. Place back into the freezer to set the halves into a ball shape. I placed a small Bamboo skewer into the Parfaits at this stage to aid with the “dipping” later. 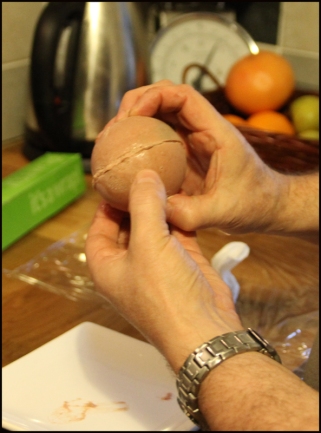 DAY 5 To make the Mandarin jelly.
45g of Leaf Gelatine
500g of Mandarin puree
80g  of Liquid Glucose
0.4g of Mandarin oil
1.5g of Paprika extract. ( or Orange colouring if you cant find the paprika extract )
I couldn`t find Mandarin puree anywhere so ended up having to make my own. I simply took 5 fresh Mandarins , and very gently simmered them for 2 hours in a pan of water. I drained the water off and then blitzed the mandarins with a stick blender to puree them. The puree was then passed through a fine sieve and there i had my puree.I then weighed out the 500g that i needed.
Try and get Mandarin puree as a priority as I found the skin adds bitterness to the jelly. Next time I make this ill just scrap the skin and puree the fruit.

The leaf gelatine was added to a jug of water to allow it to soften for five minutes. While the gelatine was softening i added the glucose to the hot mandarin puree and stirred it together. After 5 minutes i drained the gelatine and  added it to the hot puree and stirred to dissolve. The Mandarin oil and paprika extract were then added to the puree. The jelly can now be stored in the fridge until the parfaits are ready to dip.

So on to the dipping stage of the recipe. Gently warm the Mandarin jelly in a small saucepan until it melts back to a liquid.Allow the jelly to cool to room temperature (28 deg C) .Remove the Clingfilm from the frozen parfait ball and holding the bamboo skewer, carefully dip the whole parfait ball into the Mandarin jelly. Allow the excess to drip off and place the skewer into a piece of polystyrene to allow the jelly to set. This will take literally 30 seconds because of the frozen parfait. 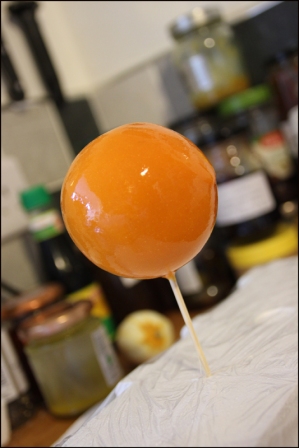 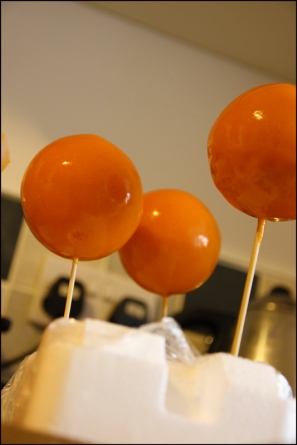 My jelly was quite a thick mixture , it probably should have been a lot more liquid in its consistency but i didn`t have a recipe for Mandarin puree so i just made it up as i went along. I dipped the balls in the jelly twice more.Once would have been enough so proceed with this in mind.

Place the balls back into the fridge preferably in a lidded container and allow them to slowly defrost for at least 6 hours….or overnight.
DAY 5 Once the Mandarin parfaits are defrosted , remove them from the fridge. Place your thumb on the top and gently press down on the jelly to create a flattened indent. This creates the realistic Mandarin shape and stops them looking too rounded. To finish the fruits off I used Bay leaves fresh from the tree. My Mandarin fruit was brought to life. Little cloves could also be used to create a realistic finish.
It was definitely well worth the time and effort to make these “Meat fruits” , they would be fantastic served up as a starter on xmas day. Try and get the correct sized moulds if possible as the ones that i used were pretty big , a little too big for a starter portion.Good luck with your efforts and enjoy the experience. Hopefully you will get to taste the “real deal” soon.